Together for the first time, oldskin and newskin. The replacement skin I bought from Ralph Hoehn’s www.pouchboats.com, shipped Monday, arrived today. Ralph told me I could expect it after the weekend, so I was surprised to see UPS pull in the driveway this afternoon. Were it not for the fine grains of sand inside the hull, and some slight wear on either side of the split rear deck just aft of the cockpit, I’d say the hull was brand new – not even a scuff mark on the keelstrips. I figured Boat Day would be faded skin’s Last Hurrah, but it looks like my Owl Creek exploration last Sunday marked the honorable end to a long career first as Pouchboats’ demo-boat, and as my own faithful Rocinante’s hardy covering.

I was at home for the blessed event because I got sick at lunch – either the cold coffee I consumed this morning in Lincoln County (who knows, maybe it was older than 24 hours and had grown something to which my intestinal tract and immune system objected), or that sandwich I had in my lunch. Anyway, suffice it to say I’ve felt worse today than I’ve felt in well over a year.

I had to open the box right away to see just how red the deck.

Then, because I felt a little better after crashing until two, I decided to remove the old, faded skin, and replace it with the new. Spattering rain fell as I took the box outside and removed the new hullskin, all bright and smelling of supple PVC, laying it on the grass beside where I’d set Campsis Radicans.

The new skin didn’t come with deck bungees, but that deck-hatch should prove better than equally useful, and I’ve still got the bungee from the old deck. Some other differences I noticed immediately: 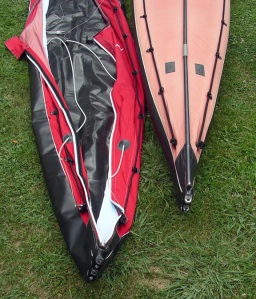 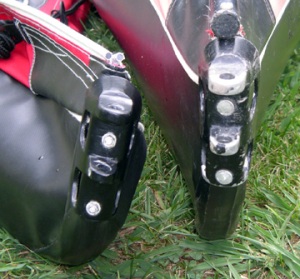 I overexerted myself this afternoon, and failed to properly center the skin in the frame. By the time I went back into the house, my clothes were soaked in the stinking sweat of sickness, and I’d been unsteady on my feet as I picked the reskinned boat up and set it on its sawhorses. Perhaps the 303 I ordered will arrive tomorrow, and I can treat the deck to prevent rapid fading tomorrow after work. If I’m feeling well enough, I’ll also try to recenter the frame in the skin.

Boat Day in Murfreesboro and Smyrna. These events offer an opportunity to try out a variety of canoes and kayaks, both solo and tandem, in slow moving or flat water. Experienced paddlers from the Tennessee Scenic Rivers Association will be on hand to demonstrate skills and safety requirements. There will also be booths and exhibits from various community organizations and agencies. The events are free and open to all, but minors under 18 must be accompanied by an adult.