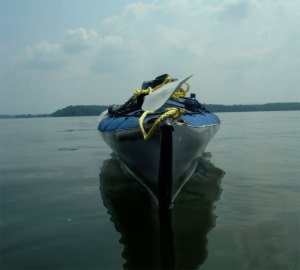 The Great Blue Heron, my Pouch RZ96 tandem kayak, beside the boathouse dock at UTSI

In my behemoth tandem folding kayak, one of my nephews and I paddled Woods Reservoir today. It’s a great boat – stable, relatively fast, extremely sturdy – but its seatbacks are instruments of torture. I have been planning to buy backbands to replace them, but my wife objects to most kayak-related expenditures. Since Seventy-Six came to live in our house, my wife and I haven’t had the RZ out this year. This is only the third time I’ve had it out this year. So, I’ve been putting off the purchase.

My nephew’s a tall, 13 year-old kid. I made him helmsman today, but I think his mind wandered. He frequently had us steering out into the middle of the lake, or into an overhanging tree. We saw pine needles looked as long as railroad spikes. Pine spikes.

We ate our lunches seated on a Woods Ski Club dock. Three teenage girls repeatedly jumped off a nearby dock, and swam nearby.

We startled some ducks, and they took wing.

We watched a short-winged biplane performing stunts high up overhead. The plane’s engine stalled, and the silent aircraft tumbled down toward us.

“Are you going to move?” my nephew asked.

“Nope,” I thought, “No way to tell where it’s coming down, and anyway, the engine’ll catch.” The plane’s engine came to life again as its pilot completed the maneuver, faster than the time it would’ve take me to voice my thought.

We rested again at the UTSI boathouse dock before continuing to the boat ramp near the Rec Beach. At the boat ramp my nephew tried to catch small fish hatchlings in his empty Vitamin Water bottle. The crayfish he tried to get fell apart, having been dead but intact poised pincers open for no telling how long. A surprisingly large fish startled him, then swam around us as we got our gear together on the dock.