Warm and not very windy today. I put in at Pleasant Grove boat ramp near the top of Little Hurricane Creek branch on Tims Ford Lake. First found the location in October, 2007, and paddled Little Hurricane branch that November, and again in February, 2008.  Some bearded guys were fishing from the bank when I arrived about nine. I believe I mentioned earlier today that I had a lazy morning.

My goals were to paddle all the way down Little Hurricane Creek branch, then some of the lake’s south shore toward the state park. I’d hoped to get to Big Hollow, but only managed to explore Fanning Bend today. (Another possible goal is related to subject-verb agreement)  Maybe 12, 13 mile roundtrip.

The leaves are not yet as colorful as they will be in two or three weeks. Water’s not as cold, either, but is certainly cooling off. I saw fish, not as many of the herons as I’m used to seeing, two small black ducks with white beaks, empty covered slips from a lakeside housing development that’s not taken off yet, a yacht, ostentatious houses, a living turtle swimming head out of water before diving at my approach. 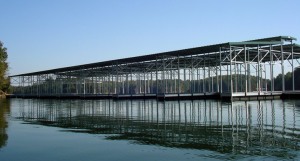 In rehab, money saved after having been in rehab, profit money from a rehab to the stars, mocking rehab? 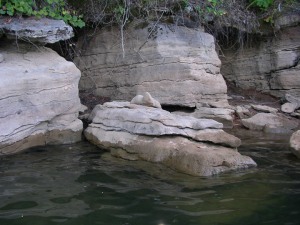 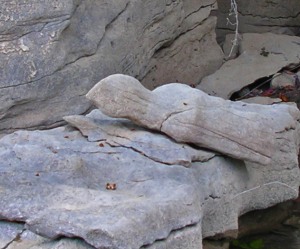 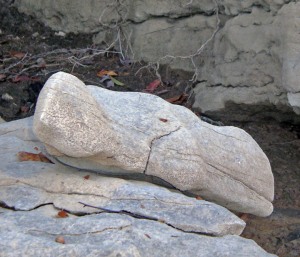 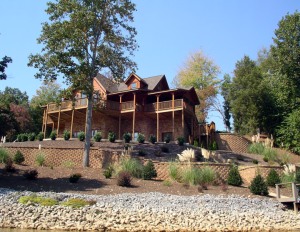 I liked this house

Not as interesting a find as Caiaphas' ossuary, but more wholesome and useful - a little stone box dispensing spring-water 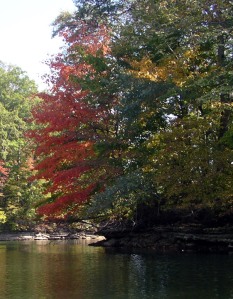 I like the orange leaves and the bright red leaves best