We bought the house we’re living in eight or nine years ago from the heirs of the man who had it built in 1957. 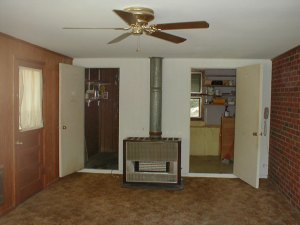 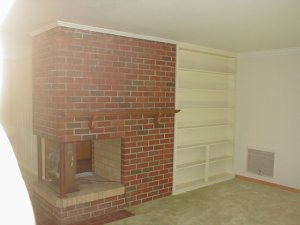 The photos above show how it looked when we signed the contract. Over the years, we’ve made a number of changes – removed very old propane heaters, changed it over from fuses to breakers, added central heat and air-conditioning, torn out all of the old carpeting, repainted every room except the kitchen, added some bright sunny wallpaper to the kitchen, had the bathroom tiled, put new carpeting in the bedrooms and bonus room, etc. Because we really liked the open living-room-dining-area floorplan arranged around a central brick fireplace/hearth, and we’re too cheap to do extensive remodeling that the house didn’t really need anyway, we haven’t added on to or altered the structure.

Last week the post office delivered two letters from an insurance company, one of which was addressed to the man whose heirs sold us the house, and the other of which was addressed to another man with the same surname. I looked up the family name in the local telephone directory and found there the name of the one family member I remembered meeting at the time we bought the house. I left a message at that number, and the next day the man returned my call. He lives in a neighboring town, and said he and his wife would be in the area Thursday on their way home from another place.

They came by about 6:00 pm, and stayed and talked about 30 to 40 minutes. He said his parents moved up here from Boaz, Alabama, in the 1950s. His father was a welder, for awhile, at the base, until those in charge of the facility annoyed him. After that, he got work as a boiler-maker welder with a company contracting on the many hydro-electric projects throughout the Southeast. His mother taught middle school here in town.

The family raised four sons in our small house (and when I think of that, I wonder what’s wrong with us that we feel crowded here with just one baby less than a year old). He said the room his parents slept in was the smallest of three bedrooms, the one we’re now using for a nursery. The four boys all slept in the largest bedroom, the one my wife and I now use. They kept what I call the middle bedroom as a mostly unused guest-room, just like we do. He said the family rarely used the living-room, that it was kept immaculate for visitors, but spent most of their time in the den (which we refer to as the bonus room) which had originally been a carport adjacent the kitchen.

He told me about his mother’s portable dishwasher, which for about five years took up most of the kitchen’s floor-space. Told me about how he’d cut out the bricks to enlarge what was originally the space for a single oven in the kitchen-side bricks of the fireplace/chimney, then had held a cabinet, and had replaced that cabinet with plumbing and a dishwasher. Said that as bricks age, they become harder or more dense. We replaced the original no-longer-working dishwasher we found in the wall a year or two after we moved in. Great thing about a dishwasher at waist-level is it’s easy on the back.

He remembered looking at it that one of his brothers made the mantelpiece in the living room. Said that some memories he thought were completely lost had come back to him. I was glad to hear the history of this house, and to have as guest here someone who’d grown up in the house.

Here are a couple of “After” shots: 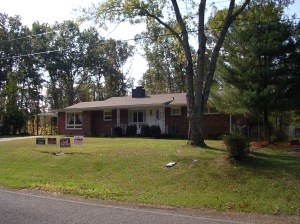 6 thoughts on “This House”