All holiday get-together obligations I discharged on Sunday the third at a lakeside gathering.  At the cookout, the few people I could relate to had an easier time fitting in with the ones I could not than I did and were consequently not at odd ends like I was.  I overate and played outside with my son.  Away from other people, my only significance issues had to do with whether I have any in the mind of God.

I spent the early part of the Fourth engaged in the normal vacation-time activities of family living, then in late morning I drove across Muncie on 32, through Yorktown, and into Daleville where I arranged shuttle service and floated part of the White River.  Before our trip north, I bought a discounted blem “Arrow” paddle from www.foxworxpaddle.com. Although I could spot the defect – a sort of knot-like place on the shaft, it mattered not at all.  Very lightweight and easy to use in comparison to any single-blade paddle I’ve used before – normally outfitter-type paddles or whatever a canoe’s seller has thrown into the bottom of the boat.  The one thing I didn’t like was its varnished finish. A tung-oil finish is a lot less likely to produce blisters.

My miserable day on the water began at the outfitter’s parking lot where I scratched my wife’s Ruby Red XC70 when misjudged the balance of the Grumman in relation to the Cross Country (never had that problem last year with the 850) and lost control of the canoe as I took it off the wagon’s racks.  I kind of dropped the canoe behind my back while trying to slow its fall and sustained some muscle damage that felt like indigestion that mimics gallstone attack.  Good thing I’d left space between the Volvo and the semi-derelict (Mitsubishi?) car at right.  I wondered how many days it would take me to reach the Gulf of Mexico if I decided to miss my takeout.

On the water, it was like I’d forgotten everything I ever knew about paddling.  I got stuck on rocks four times.  My shoulder hurt like the mythical place of the ancient Greek dead.  The water was low in a lot of places, and I had to get out and drag the canoe once or twice.

I picked a sprig of phlox, the only thing in bloom along the river’s banks, for my wife.  By the time I reached the take-out it had wilted so badly that I settled for snapping a picture of the flowering plant to show her.

To the good, I didn’t fall out of the boat, I’d brought a good lunch, and I had that excellent Fox paddle.  At the take-out, I met a couple who’d also arranged shuttle service and we discussed metaphysical homelessness, significance, fitting-in, real-estate values, Northern California, Muncie, and pottery. 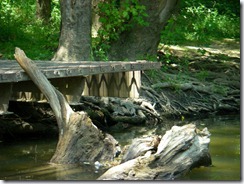 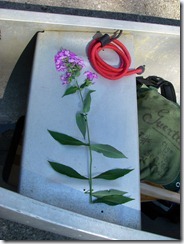