I’d made a hash of removing the cotter pins from the cranks of my Raleigh Sprite (ca. 1973 or 1974), so I requested the assistance of my local independent bike mechanic, Luke.  Since Harris Cyclery had sent me the Rivendell Silver Downtube Shifters I’d ordered, I took the Razesa to him for their installation, as well.  Picked-up the bikes Friday afternoon and tried out the new shifters with a ride over to my mom’s house to surprise her, my wife, and my son.  It’s only about an eight-mile roundtrip, but necessitates driving in some traffic and has one pretty steep downhill on the way out.  They worked flawlessly, but had less “ratchet” feel than I’d expected given the Rivendell’s somewhat florid write-up and comparison to the SunTour Power Shifters (which I have as stem-shifters on the Miyata).  Still, they worked flawlessly.  Luke said the right-side Simplex shifter that was original with the bike was about worn-out.  Eric had told me that it has for some years exhibited a tendency to come loose, and that tendency has in my experience manifested several times when shifting into a lower gear on what are for me challenging hills resulting in the availability of only the highest of the six gears in back.  Now, I will no longer have to carry a stubby flat-head screwdriver when I set out.  Here are some pictures of the Rivendell shifters on the bike: 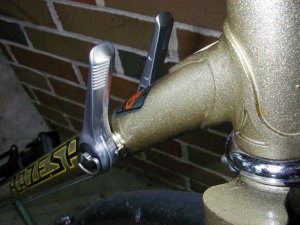 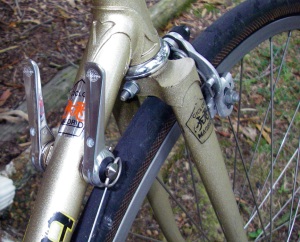 Rivendell Silver Shifters (you can see the little logo with the word, “Silver,” across it)

One thought on “Rivendell Silver Shifters”