For Christmas, I – the undeserving recipient of so much already – got a new ‘saddle’ for the Miyata 610.  It’s a Pro FXR with a cutout to prevent pressure that would restrict blood flow to the genitalia, which is to be preferred over restricted blood flow and resulting in numbness.  I’ve posted a close-up of the ‘saddle,’ below.  Previously in this space I have remarked on the absurdity of calling a bicycle’s seatpost a seatpost while calling a bicycle’s seat a ‘saddle.’  Hereinafter, to save me the hassle while typing, I will omit the single quotes although the, oh, maybe derision is the word I want, the reader should take as given. 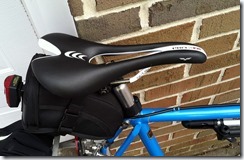 I’ve taken several rides now with the new seat, a Forte Pro FXR,  in place and have found it comfortable and an all around better solution than the Planet Bike comfort saddle I bought and installed several months ago.  The Forte’s not soft, nor is it expensive, but it is a real improvement over what I’d been using.

For the past couple of months, I’ve been monkeying around on the bike.  here are a few photos from recent rides – 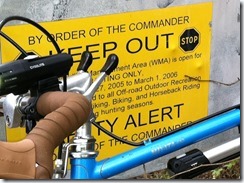 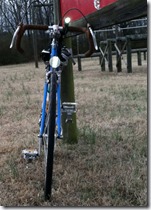 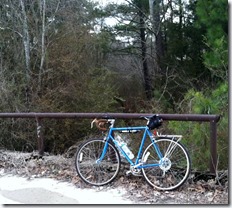 That KEEP OUT  warning expired May 1, 2006, and I rode the broken, 60 year-old chip and seal trail on May 2, 2014.  Nobody shot at me, although my mechanic tells me, “Getting shot at is not a problem; getting shot is.”  Lately, I’ve also been looking at the Pashley line of bicycles, but reckon I’ll stick with the Miyata for my leisurely country rides for the next little while.