Last week’s Retro Ride in Tullahoma with the Highland Rim Bicycle Club, co-sponsored by The Celtic Cup, went pretty well.  Denise Smith, who, with her husband, Chris, owns the coffee house, brought and displayed the ancient Raleigh Superbe roadster her father bought and rode while serving in the military and stationed in England.  Denise said she used the bike while in college, adding at that time grip-foam to the handlebars; also that the Sturmey-Archer four-speed shifter has one setting that is null because the bike’s internally geared hub has only three.  Denise’s Raleigh has the locking fork, although it has no Dyno-Hub, it has got a front-rim dynamo.  Sadly, the bike’s not in useable condition, but Denise said she would like to have it restored.  Here are a few pictures – as with all the photos on this blog, click on the picture for a larger image: 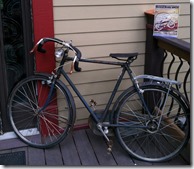 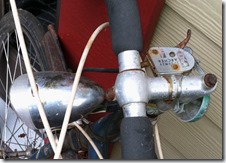 I didn’t snap any photos during the ride, so I’m using a few below that were taken by Julia Harrison, bike-club secretary.  The close up of the guy with a spaceship on his head is me.  For a retro-look, I wore a 1980’s Orbea bicycling cap.  Under the helmet, it kept the sweat out of my eyes, but since the bill is broken, looks pretty silly on its own.  I’ll try to find another one, someplace.  I rode the Miyata and one of Adrian’s sons, Tim, rode the Razesa. 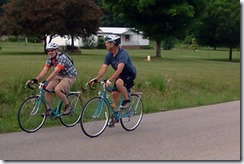 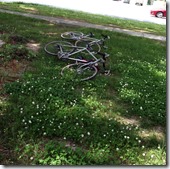 We ended up riding a 26 or so mile course, as opposed to the 22 miles originally planned.  Our route took us from The Celtic Cup through an older and run-down part of Tullahoma, then into the country a ways, across a four-lane, through AEDC, across the Elk River dam at Woods Reservoir, and back to Tullahoma via Spring Creek Road, then some side streets and back to the coffee shop.  Most of the group had lunch there or a beer there, afterward.  Most of the bikes ridden were friction-shifted.  The oldest was a blue 1974 Schwinn Le Tour.  The bikes pictured on the grass, above, are his and hers model 1979 Schwinns.  Adrian rode his Bianchi Trofeo.  In all, there were eleven riders who participated.

In other news, I think the headset on the Bridgestone MB-4 is finally about to get done.  I was totally unable to get the fixed cone-thing that has to be press-fit on the top of the fork press fitted, so I got help on that.  Now, I’ll try to reassemble the fork, headset, and handlebars – maybe this weekend.