Today I tested the new Continental Tour Ride tires on about 25 miles of good paved road, as well as on some gravel, grassy, and degraded tarmac roads and lanes.  This was a beautiful for day for a ride – overcast, light rain intermittently falling, wet roads, leaves beginning to accumulate in the streets, temperature in the low to middle 70’s.  My goals were to see whether or to what extent the tires would slow me down on the road, and to see how they, and the Jamis Supernova, held up on rougher paved and formerly paved surfaces.

I got up this morning and washed, then lubed the Jamis; added air to the tires inflating to the maximum pressure of 70 psi in the rear tire and between 65 to 70 psi in the front tire.  Although I added some air, the tires remained well-inflated since their installation Thursday.  Wearing mismatched kit, with a couple of water bottles, an expired Larabar lemon pound cake bar and an expired Clif caffeine Mocha pudding/gel/tube/thing, I set out.

This was probably not a fair test, because those execrable Mavic hubs spin so poorly the bike seems, during the first two or three miles, nearly unride-able.  After that, either I got used to having to pedal harder than I would have to using a wheelset in good order, or the hubs loosened up.  Still, I think they made me tired.  I stopped at picnic table at an elementary school to eat the Larabar, and read on the label it contains 3/4 cup of fruit, and peas.  In one of the neighborhoods, I stopped and talked to a retired physician of my acquaintance for about 45 minutes.  Getting an unexpected chance to visit with people I like is one of the benefits of a mid-morning Saturday ride.

My average speed, when I checked, during the paved portion of my ride, was down from last week’s 15.5 miles per hour riding the same bike with Continental Ultra Sport II tires, to about 14.65 mph.  After mixing in a variety of rough surfaces, by ride’s end, my average speed was a plodding 14.3 mph.  I look forward to riding on better hubs soon – I’ll be taking the Jamis in for a tune-up and hub-service early next week.  Then, I’ll be able to better assess the Continental Tour Ride tires vis-à-vis speed and rolling resistance. 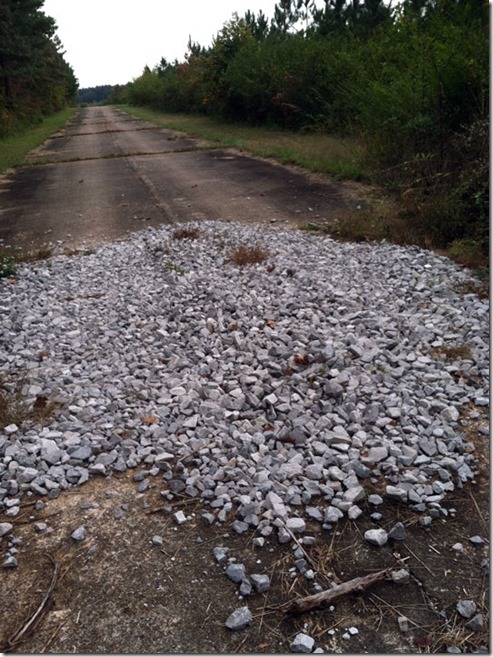 The Tour Rides were sure-footed, to use a reviewer’s cliché, on slick wet pavement, slick fallen leaves on wet pavement.  Both the Jamis Supernova and the Continental Tour Ride tires handled predictably and well on grassy lanes, gravel roads, degraded tarmac, washed out tarmac, pounding uphill and down.  I balked at riding over a patch of gravel the chunks of which were a little larger than golf balls.  I’d been riding along at about 16 mph when I came to that pile of gravel; it was so close to the end of the road at the main highway, that I just turned around and pedaled back to find a different route to return to public thoroughfares.

I didn’t ride into any briar patches or through any slick, red mud today; that was Thursday’s project.  During today’s ride, I took no pictures in the neighborhoods – maybe next time I’ll prop the bike up in front of a vacant Stepford McMansion for your viewing pleasure.  During my ride, the drizzle and light rain became breezy overcast, and a lot of the water on the ground dried up.  On the way back to my starting point, I stopped at a coffee shop for a cup and a cookie.  I spent a while talking with the owners, then sat at a table out front and rested my flabby, middle-aged buttocks a bit before pedaling on. 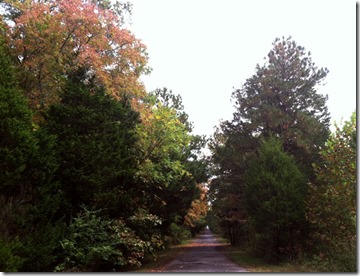 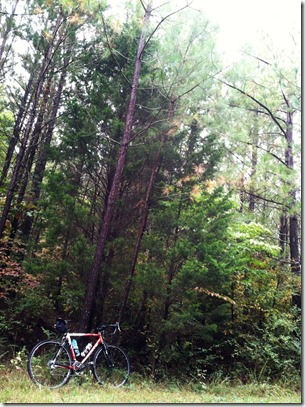 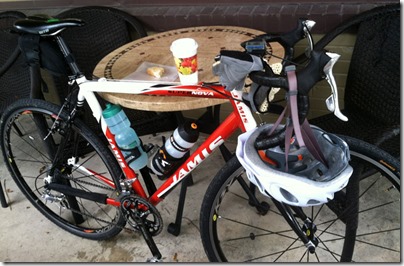