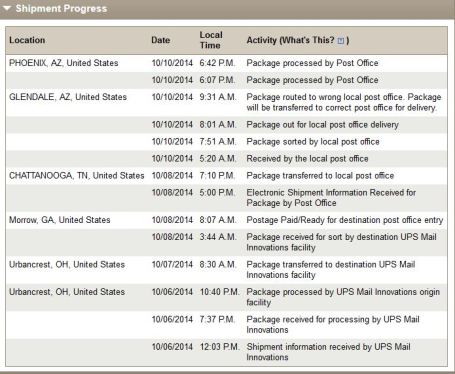 Why would UPS have anything to do with the United States Post Office? Strange. Dunno which of the two confused this shipment’s routing.

I checked the UPS tracking number provided by Road I.D. to locate the black sport band they sent last week.  Turns out it almost made it here, then got re-routed to Arizona, and is probably on its way back to Road I.D. in Ohio, or to me.  Time will tell.  I’ll take some photos and post them when the package arrives.

When I drove to the bike shop this morning, I expected to return with the Miyata.  As I was about to pay for the service and leave with it, I noticed the shift cables were really slack, and asked about it.  The manager seemed surprised and took it back to the workshop and examined it on a repair stand.  He examined the ticket.  I explained why I brought the bike in.  He said the fellow who checked the bike in and wrote up the ticket hadn’t noted my concerns.  He and a mechanic looked at it and we agreed that the lead mechanic should take a look at it.  Hoping it will be done by Saturday.

I’ve still got the Razesa to ride because neither of those who expressed interest in buying it actually did so.  Maybe I’ll get a ride in someday this week.

My ticket was dismissed.

So, here I was with a day to get stuff done and didn’t really have a bike I felt comfortable taking for a long ride in lousy weather.  What did I do?  I cleaned bathrooms and took care of another responsibility I’d been procrastinating about doing.