For the first time in two years, I was able to return to Indiana during the July 4 holiday, and it was great to be back.  This time, I only took a few short, 30-40 mile rides, but they were my longest rides of the year.  I took a lot of pictures.  Got my son’s bike properly fitted for him by Mike O’Neal at his Greenway 500 bike shop, got new stem there for my Orbea, and a Dirtway 500 jersey for my son.  My son and I  took two fairly short rides together, one of them on the Cardinal Greenway trail.  My rides were over chip and seal farm roads and incorporated the Cardinal Greenway, two of them were to Muncie where I stopped both times for a second breakfast at the McGalliard Chic-Fil-A.  Super courteous service even for sweaty, slightly overweight, middle-aged cyclists in lycra – I highly recommend this franchise if you’re riding through Muncie.

Indiana’s rural beauty was a daily joy to behold and be about in.  We enjoyed spending the week with my wife’s family and the kids all seemed to play well together.  We stayed out late and watched fireworks in a neighboring town.  I’ll post some photos, generally in the order in which they were taken.  Possibly some commentary about them, as well. 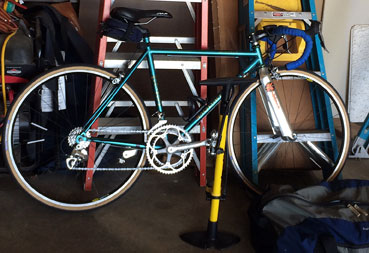 Orbea & Modikoso in their temporary home.

Here is an example of a chip and seal road in fairly good repair. 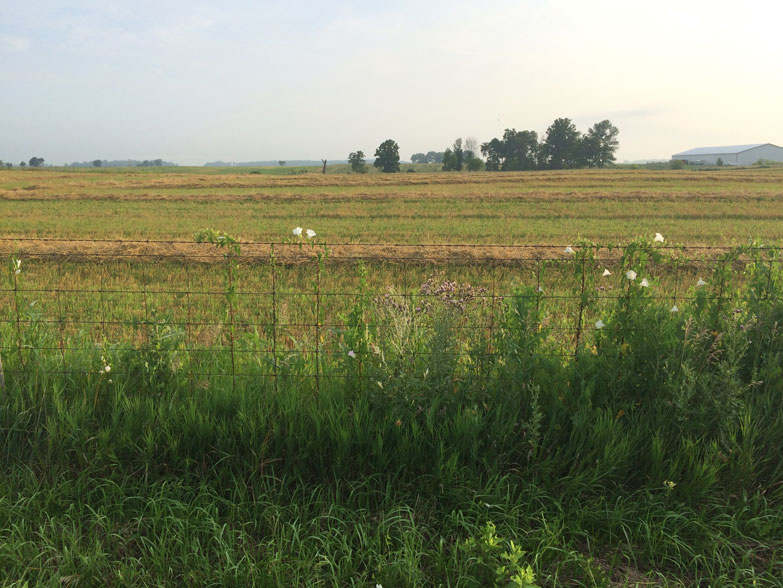 Fence with wildflowers bordering what looks like a hay field.

A trailside shelter erected w/in the past two years near Blountville.

Trail map near the shelter in the previous picture.

Mystery Quonset hut compound/factory at the intersection of Cardinal Greenway trail and Brady Street, Muncie.  Reminds me for some reason of that Mel Gibson film, “Forever Young.”  Makes me want to engage in urban anthropological archaeology when I encounter buildings like this.

Second breakfast – some kind of egg-scramble bowl with hashbrown bits (in box) and Powerade – at the McGalliard Chic-fil-A near the Cardinal Greenway trail.  Since my previous visit, a convenient sidewalk’s been paved from the trail to nearby businesses. 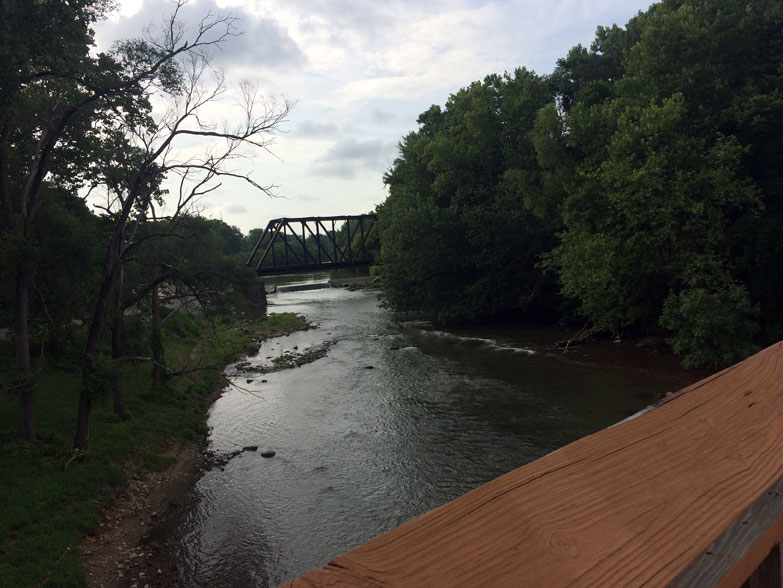 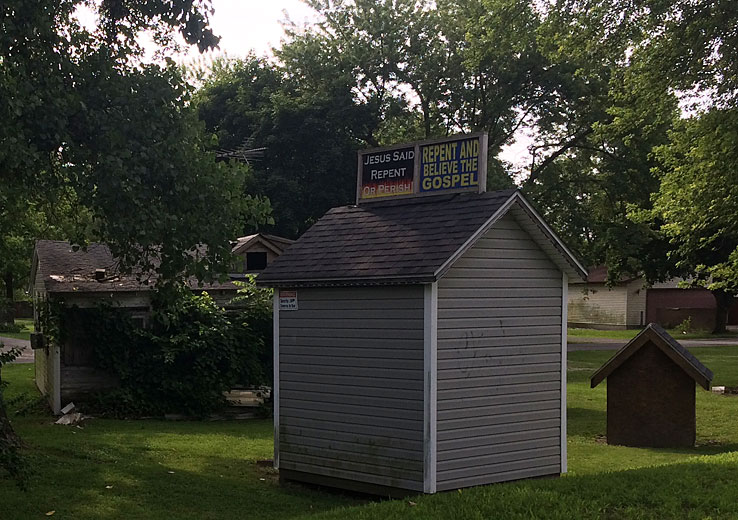 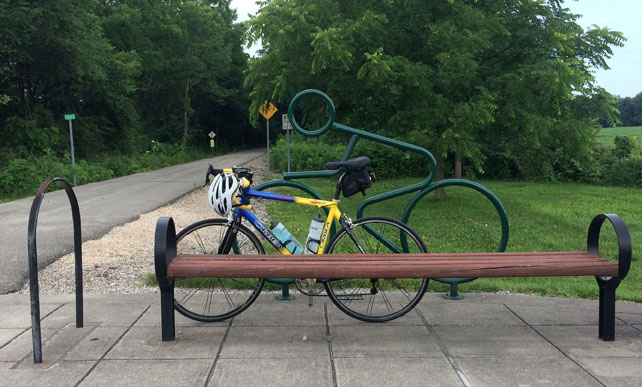 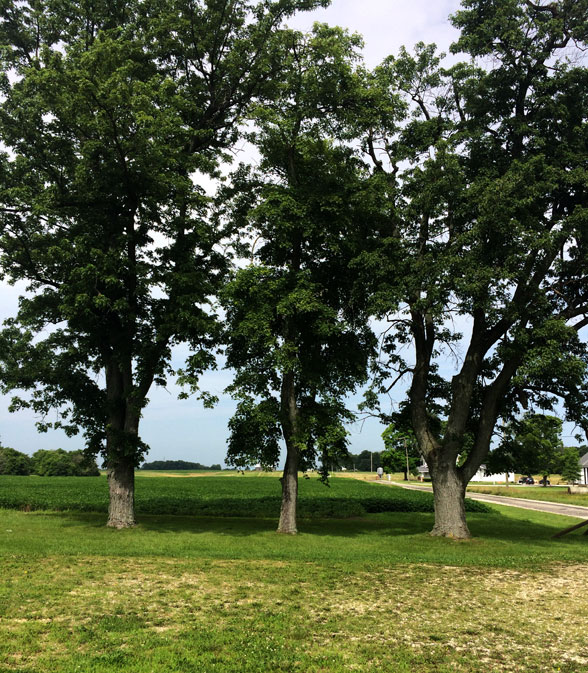 Did I mention it was hot during the week of 4 July?  As I sat resting after taking the snapshot of my filthy leg, I for some reason found comfort gazing at these trees. 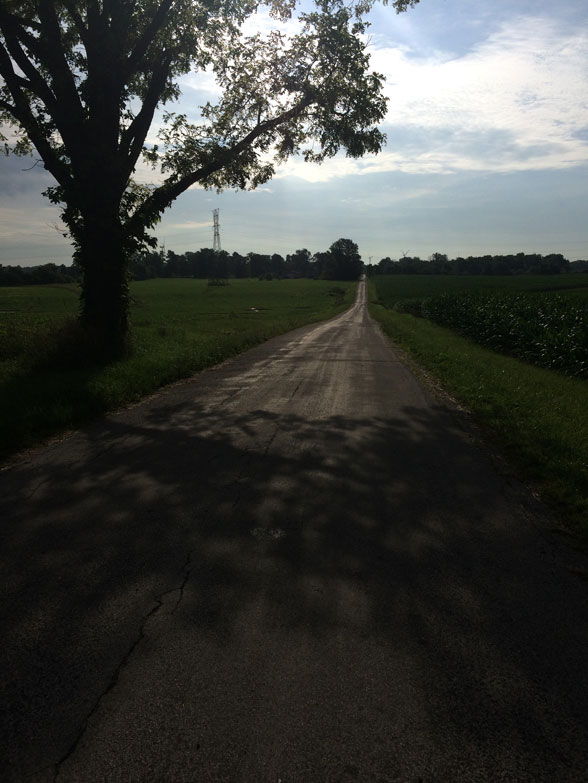 Early on the morning of July 4, I set out by a different route.

I rode through a small town of about two hundred inhabitants. 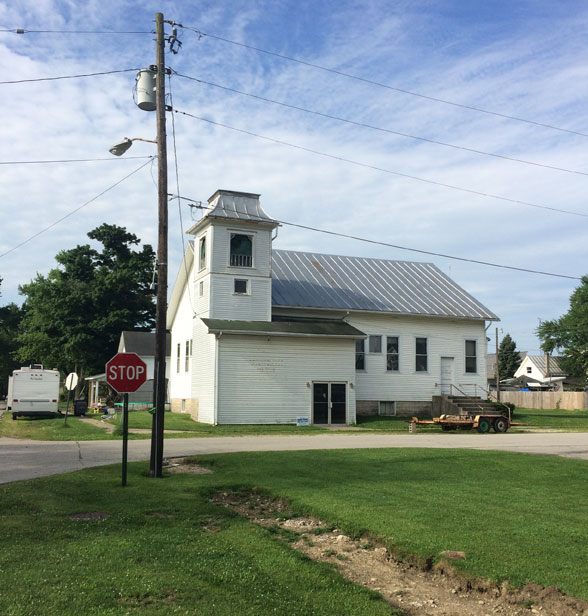 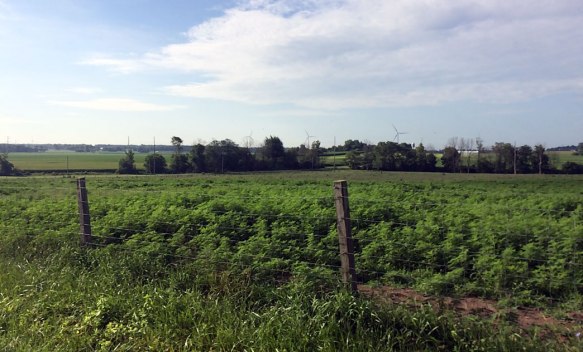 Some windmills along the route.  Closer to Losantville, I got chased by a pit-bull terrier but came to no harm and enjoyed a pleasant conversation the dog’s owner.

After getting a little bit lost, I eventually found my way to Losantville where I ate a second breakfast of egg, sausage, cheese croissant at the Phillips 66 gas station at the intersection of 35 & 36.  Later that night,  my family and I attended a firework’s display presented by a patriotic veterans’ association.

Next day, in the afternoon, we took the kids to see The Incredibles 2 at the small cinema on the courthouse square about 30 minutes from the farm. 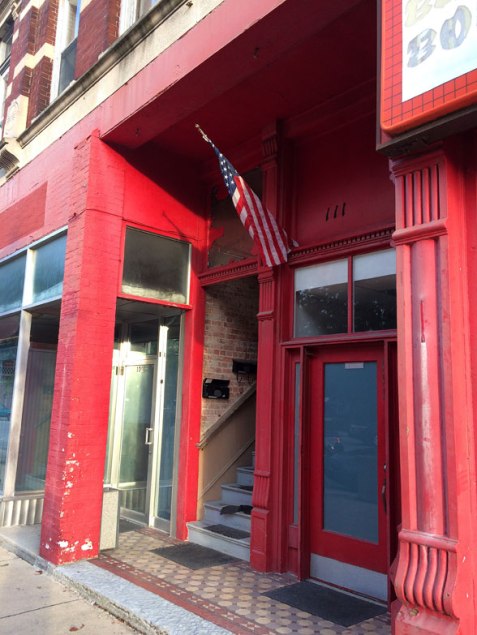 Rode out around Prairie Creek Reservoir and stopped here at Harris Chapel Church of the Nazarene to snack, sip Gatorade, and snap this picture.  The building’s got a water spigot around back that I’ve used in the past when I’ve run low on water.

This is my favorite house near Prairie Creek Reservoir.

Later, I took pictures around the farm buildings while my father-in-law showed the kids the grain bins, gave them tractor rides.  The dads (me included) and my father-in-law got the sweep auger out of one of the bins using home-built jig fit to the old Ford tractor’s bucket and some chains. 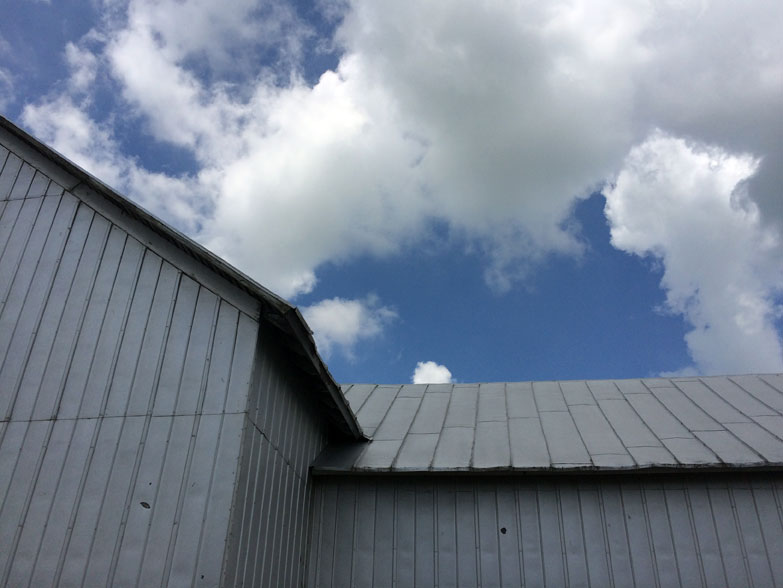 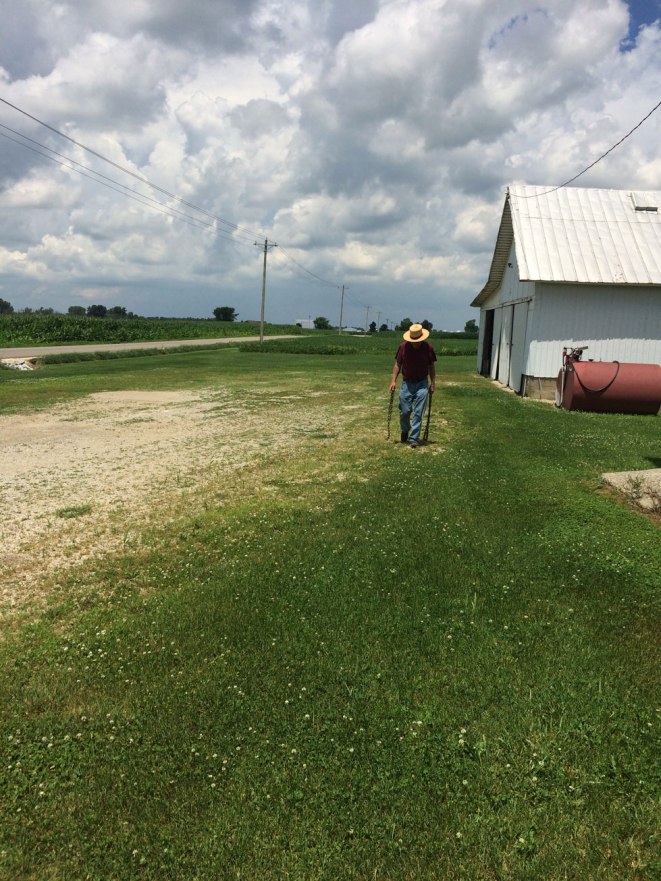 That’s my father-in-law carrying the chains for the tractor bucket jig.  He is a man who knows his work. 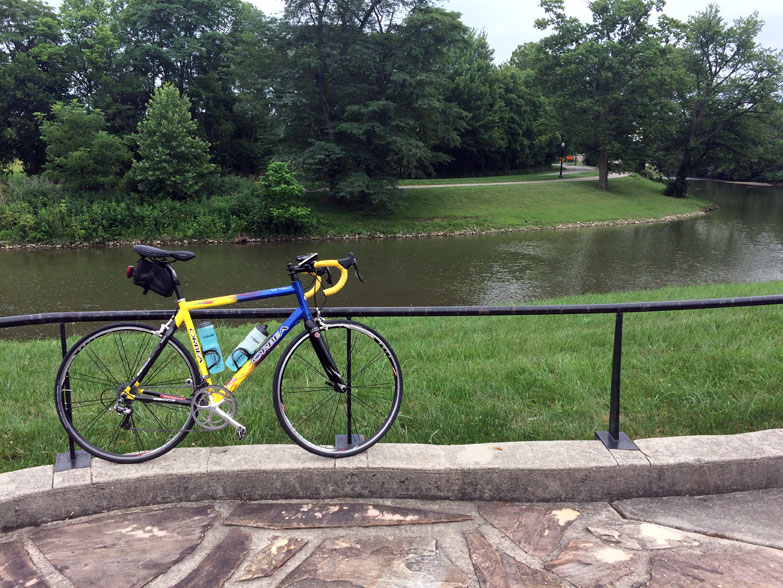 That’s the Orbea alongside the White River at Muncie

Former train station at Muncie, now a Welcome Center or something of the sort associated with the Cardinal Greenway Trail.  That fat blob reflected in the leftmost window is me. 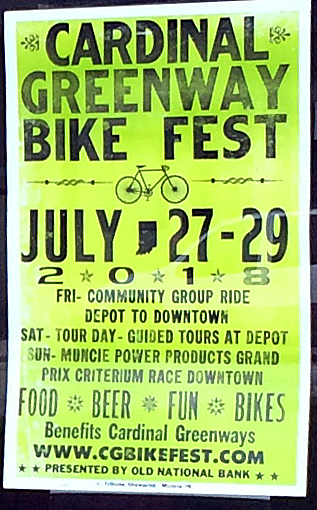 As of this writing, there’s still time for you to participate in this activity.  http://www.cgbikefest.com

This year, I for the most part resisted the impulse to photograph interesting homes along the trail.  I decided to respect the privacy of those who have no choice but to share frequently up-close views of their residential property with trail users.  This view’s not a close-up, though.  Remembe that movie, A Christmas Story?  It’s set in Muncie during the 1950s – these houses remind me of the neighborhoods in that film.

Here are a few pictures of graffiti from part of the Cardinal Greenway Trail as you enter (or leave) Muncie. 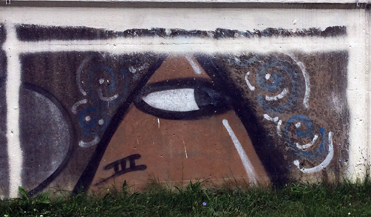 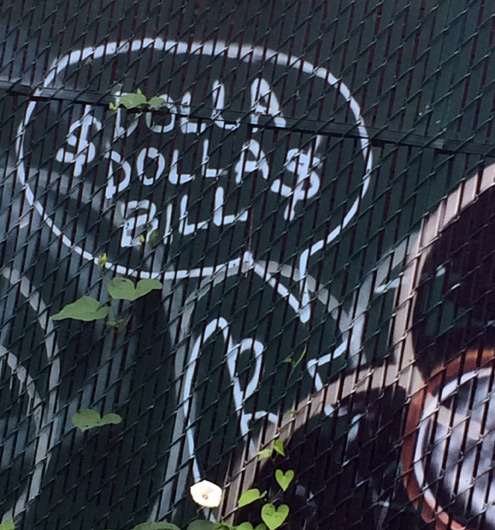 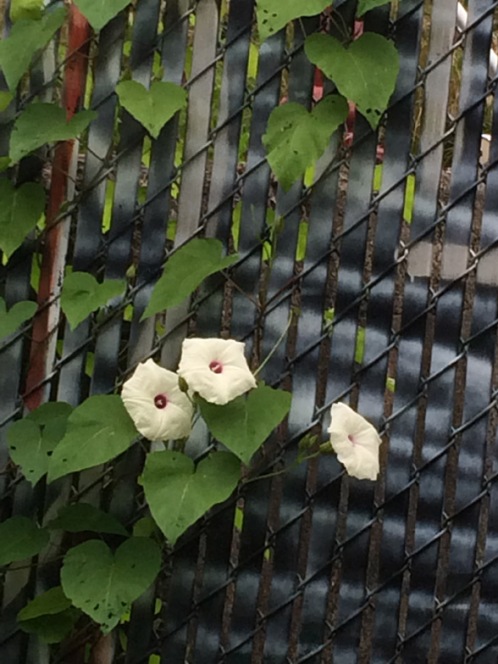 The flower in the image below reminds me of some of the graffiti I saw a few years ago under a freeway or other bridge while paddling downstream from Daleville to Anderson on the White River.

And this devilish, voo-doo image

On the way home to Tennessee, I saw an odd message on the back of an 18-wheeler’s trailer.  Drive like a boss as opposed to, say, a minion?  the unemployed? a musician?  I’m sure it makes sense to its target audience.