As has been the case for the last two or three years, I’ve been busier and more interested in living life with my family than I have been in writing about it.  Here’s a little of what’s been going on:

Last Thursday, I picked up a 2005 Gary Fisher Tarpon from a Craigslist seller for my son.  He outgrew and sold off his 1990s Giant Talon 7-speed mountain bike a couple of years ago and I’ve kept the money from that to go toward a new bike.  We tried to sell on Craigslist his 1970s Columbia Challenger in ride-able, original condition but got not even one query.  I convinced my son to donate the bike to a local bicycle club’s “reCycle” program for needy kids and told him I’d combine the value of that bike with the money from the Giant.  The Tarpon cost $65 – about 20 dollars over Bicycle Blue-Book’s valuation for an ’05 Tarpon in excellent condition, but the the bike was in such good shape I wasn’t going to insult the seller by offering less than 1/3 his asking price.  At $65, the bike came in well under the $327 the original dealer receipt indicated the seller paid in 2005. 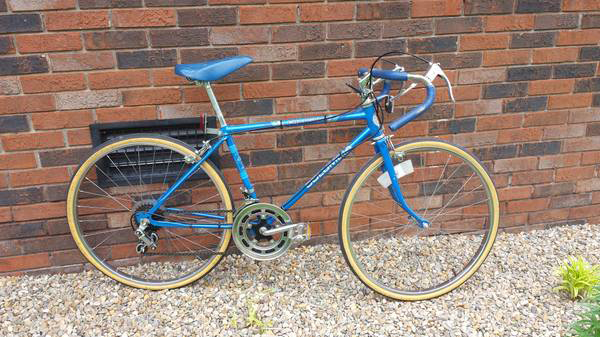 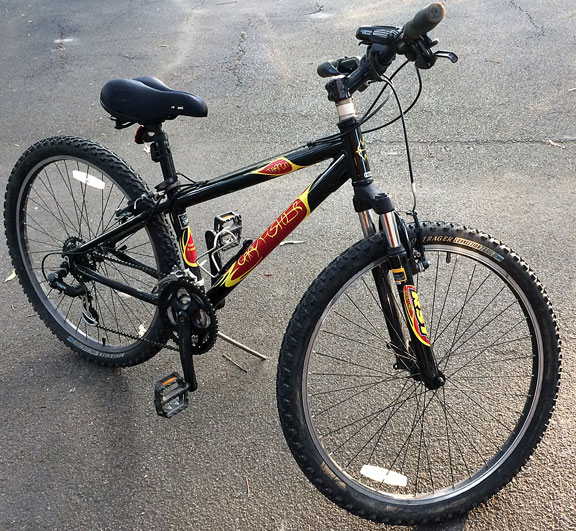 2005 Gary Fisher Tarpon – yes, I have the original seat and plan to clean it up and install it if my son decides he hates the strange, spongy seat that’s on the bike, now.

I haven’t really learned how to cook, but I can scramble eggs and am trying to learn how to make an omelet.  I usually arise on the weekends before dawn and head to the gym, then return to the house before my family is awake and make some kind of breakfast – scrambled eggs and tortillas with salsa, for instance.  On Mother’s Day, this year, I prepared a breakfast for my wife and son consisting of scrambled eggs, sausage patties, and biscuits.  I know, three things, right?  I was able to manage preparation times so that I cleaned up as I cooked and had everything on the table at about the same time.  Family was happy with my efforts, so I’ve done this two or three times since. 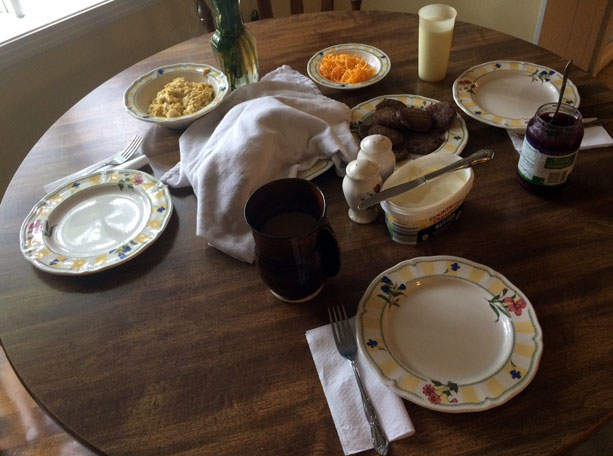 Sometime close to Mother’s day, my son and I rode a local greenway and, while looking at a creek from a low bridge saw this snake.  We saw a couple of others that day, as well. 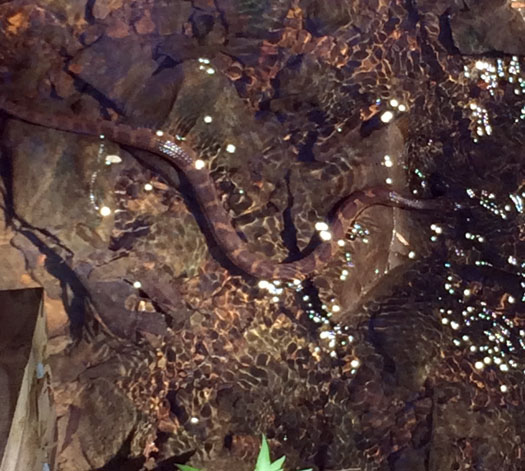 For the sake of comfort, I wish we lived in a society where open-carry was the norm.  That said, Theis Holsters serve as a relatively comfortable inside-the-waistband means to concealed-carry my pistols.  I purchased the basic leather version – EZ Clip for my FNS-9c and the Single Clip for my Glock 42.

Since the weather’s dried up a bit – and it was about the wettest autumn and winter I can recall here in Southern Middle Tennessee – I’ve been keeping the Miyata 610 at the office and riding 3-5 miles during my lunch hours maybe three or four days a week.  Here’s the uphill view from one of the routes I take: 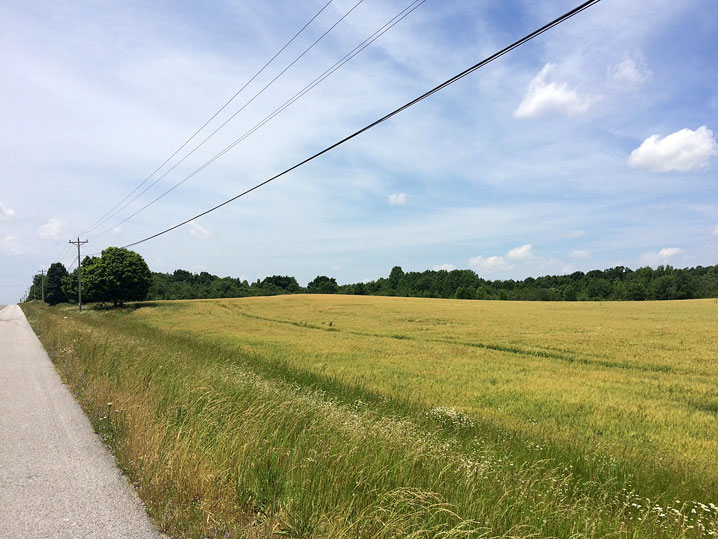 Back when I was working for the state, one of my friends at work tried to get me to watch a shave-headed, arrogant sounding jack-genius talking about what needed to happen to rid our country of our nation’s first moslem-communist president.  While in a very unfocused and general way I tended to agree with some of the speaker’s stated opinions, I:

Within the last year or so, though, I’ve spent more time target shooting and have dusted off some of the weapons I’ve had for decades.  Shooting the guns means I’ve got to clean them and some of them I hadn’t cleaned in decades.  Also was interested in researching handguns for self-defense and concealed carry.  You guessed it, I was able to find disassembly and reassembly instructions on every firearm I own and most of the ones I’d like to own on YouTube, as well as countless firearm reviews.  User forums specific to particular manufacturers have been helpful as well, in researching various pistols, rifles, and shotguns.

Many, many YouTubers fall into the category of unintentionally and comedically stupid, diagnosably sick of mind, or incompletely educated about whatever subject they’ve identified as their vlogging niche.

On the less disordered end of the spectrum, there’re a few YouTubers who, while they’ve got some quirks, generally provide real information of use to the interested viewer.

The Secret to Mastering the Handgun

I’m not sure why I didn’t post a link to this video when I first published this blog entry, but I’m correcting that omission today (3/10/2019).  The Obi-Wan Kenobi guy who narrates most of the instructional material is really good.  I’ve incorporated a lot of what he teaches into my shooting and my accuracy has improved markedly.  At the end of the video, there’s a presentation about how to interest girls in shooting that is worth watching, as well.

One of the least disordered You Tube gun vloggers is an older guy who reports he’s a Middle Tennessee resident and has a video on just about every firearm offered for sale on Armslist.com, Hickok 45.  What is it about people whose measured intelligence is likely greater than one standard deviation above the mean that makes them so entertaining?  Who would have guessed the old gun-guy rides a bike?  Here’re the videos to prove it.

Another of the much brighter than average gun-vloggers whose videos I enjoy watching is Paul Harrell.  He’s a middle-aged ex-military guy whose speaking voice is a lot like that of Mark Hamill.  Compare this Luke Skywalker attempt to reason with Jabba the Hutt (begins at about the 3:04 mark) in this video to Harrell’s video diction in any of his own videos.

One of the things I liked about Paul Harrell’s videos immediately was the deadpan way he delivers routine statements like, “We’re at the range today, so please excuse the noise you hear in the background,” or when he describes to composition of a type of target he uses to test the effectiveness of ammunition and firearms.  I recognized his style of delivery as similar that which I, in a previous vocational incarnation, used when uttering a particular phrase, explaining from a manual, or administering an assessment’s stimulus query for the hundredth time.

There are three or four other YouTube gun guys whose videos I sometimes watch, but not many.  If you’ve got a little spare time, an interest in shooting and firearms, as well as a broadband connection to the Internet, check out the YouTube channels linked above.

If you were paying attention, you may have noticed two Star Wars references in this post.

Here are a few pictures of the subject-line referenced antique which I mentioned in my previous post. I used them for an Armslist.com classified ad.  Because I didn’t get any offers I was willing to accept, and because I got a Christmas bonus sufficiently large I didn’t money from the item’s sale to purchase a 9mm pistol for every day carry, I pulled the ad and kept the counterfeited pistol.  Here are the photos: 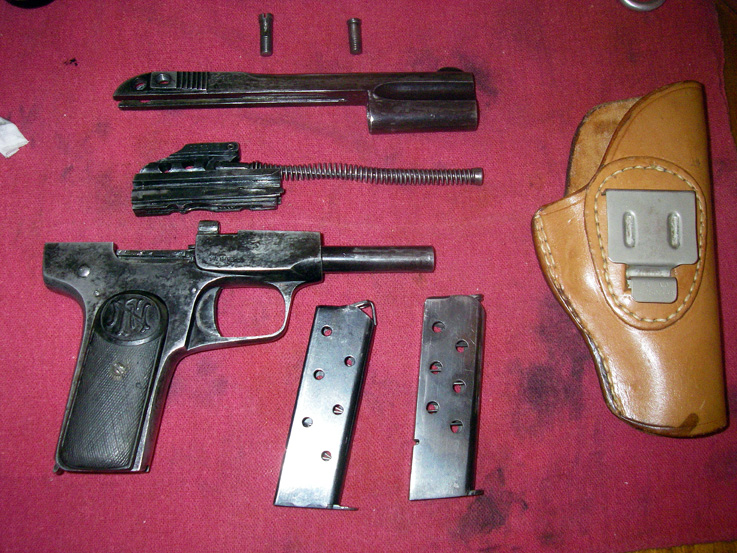 And here are a few photos of the Nanking Browning alongside my FNS-9c.  As noted elsewhere on the Internet, this isn’t an apples-to-apples comparison.  However, both are striker-fired pistols designed for concealed carry.  The ersatz FNH pistol is designed for .32 caliber and the modern polymer FN pistol for 9mm. The former has a single-stack magazine with a capacity of about nine, if memory serves, and the latter a double-stack magazine that holds 12 rounds. 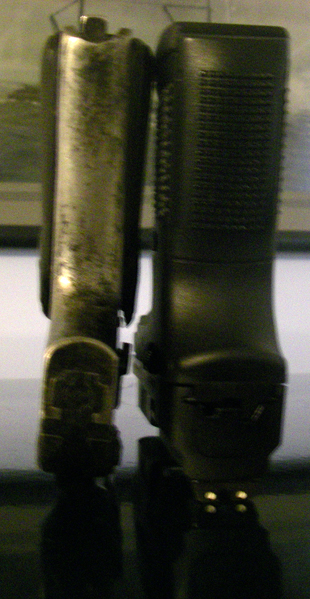 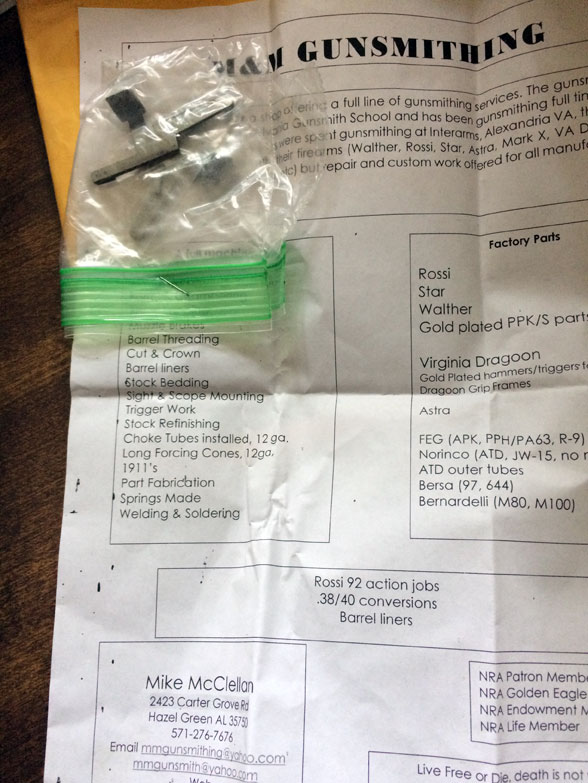 My family and I got in late yesterday afternoon from the annual 4th of July visit at the farm.  The crops – soybeans and field corn – look really good this year.  The post office yesterday delivered our held mail and in the bundle I was delighted to find…? That’s right, the TWO ejector/slide-stop parts I ordered from that excellent fellow, Mike McClellan, at M & M Gunsmithing of Hazel Green, Alabama.  I got two because one might not be enough.  Various threads on several gun-owners’ discussion boards indicate this part has been known to break.  My own experience indicates replacements are not easy to come by.

Here are a couple of pictures, front and back, of the broken part: