Last Thursday, I again rode through Normandy, this time arriving by roads I’d not previously ridden.  On a bridge over the Duck River end of Normandy Lake under which I used to paddle fairly often, I stopped and snapped a couple of pictures.

Because I was hungry again by the time I got there, I stopped and ate a sort of second lunch at The River Café.  Even though I was wearing tight-fitting cycling apparel, dripping sweat, and doubtless stank, and offered to sit outside, the waitress told me I was welcome to sit inside the restaurant.  The day’s high temperature, oddly low for this time of year, was about 60 degrees Fahrenheit.  I’d hoped to get a bowl of chicken rice soup but that day the only soup on the menu was tomato basil.  Instead, I got a grilled Cajun chicken sandwich with a side of fries that tasted fantastic and was easy on my stomach when I continued my ride.  Also, got a water bottle refilled.  The friendly service and good food warrant return visits to The River Café. 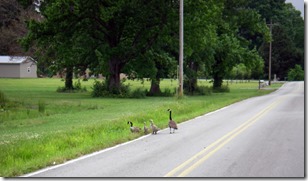 I’ve written elsewhere about those lousy Kucharik cycling gloves I got last year; that they disintegrated within the first 90 days of use.  What I haven’t written about yet is what Kucharik does well, and that is make merino wool cycling jerseys.  Two Christmases ago, I received a bright orange Kucharik long-sleeve wool jersey.  I asked for and got an Extra Large, but a Large would have fit better – I’ve tried to shrink it a bit in the dryer, and it fits a little better, now.  My choice of orange has nothing to do with the University of Tennessee.  It’s a color I’ve liked since the mid-1980’s.  The jersey is comfortable, with sleeves pushed up, in temperatures to about 70 degrees, when worn with shorts, and is able to accommodate a base-layer for winter temperatures.  Additionally, the garment does not retain the stink of my sweat after a hard ride.  Highly recommended and can be purchased cheaper than elsewhere at Bike Tires Direct.  No, I don’t receive any compensation from Bike Tires Direct, but lacking a conveniently located bicycle shop here at Stepford, they’re a good source of reasonably priced bike stuff and their customer service is second to none.

In regard to the color orange and, incidentally, Portland, Oregon, I recently emailed scans of a few small images to a friend who works at the unit where I completed my recent internship.  She’d been working on a fish painting for one of the rooms in her house, and I remarked that the fish I have depicted tend all to have an orange cast to them – that their souls, if they have souls, are orange in color.  The two larger images below are from or about my time in Portland.

The image of the mermaid, the fins or flukes of her tail behind her shoulders like the wings of a celestial being, I call The Angel of the Waters and she represents the Williamette River where the Fremont Bridge crosses over from North East to North West Portland – all of humanity is unaware of her as anything other than a body of water to be crossed or used.  Her only means of getting the attention of passersby is to rise up and harm them, but in this image she exercises patience, refraining from doing harm but not wholly content to be ignored.  Fish crownlike keep their places around her head – they are orange.  I gave the original of this drawing to my younger sister for a wedding gift, if memory serves. 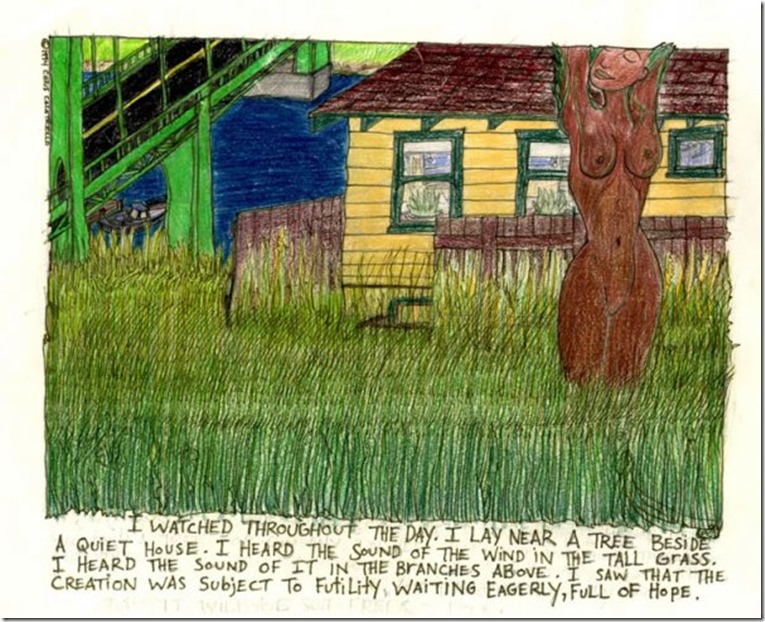 When I lived at Portland, I had a series of strange, frightening, and semi-recurring dreams – for a couple of weeks most of my nights were troubled by dreams each resuming where the other had left off.  My second-floor apartment on North New York Avenue had a view of the Saint Johns Bridge.  The image wherein can be seen the Saint Johns Bridge (perspective all wrong, by the way), the yellow house, and the hamadryad depicts a scene from one of these dreams during which I, my dream self, remained hidden during the hours of daylight to elude discovery by those who inadvertently served the evil powers that roamed the streets by night.  As I sketched the image lightly in pencil, I realized the tree looked a little like a woman, so I developed that into the composition.  As to what is written below, the allusion is to that part of Paul’s letter to the church at Rome in the eighth chapter that talks about the fallen state of the created order in relation to the redemptive work of God in Christ.

And then, a few marginal scribbles made during one of many time-wasting trainings (these in about 2004) while employed by the State.  Fish – again fish – a recurring theme in my work.