Last Thursday and Friday, I completed most of my Chattanooga reports and did some other work. I haven’t felt much like writing anything else, but do want to post some photos from my paddle yesterday afternoon at Winchester, Tennessee. Mapquest revealed the location Winchester City Park, which is across the street from the city’s Swimplex. A windy day, and possibly the coolest sunny day we’ve had this Fall, the boat ramp was not busy, although a children’s party of some sort was taking place at or around a nearby pavilion.

As I was readying Campsis Radicans for launch, a man in a bassboat in friendly fashion told me I would be well served by a sailing rig. No fish had he caught. We laughed about the wind. I was looking forward to paddling against it, I felt like I needed the exercise and something to resist (however, if the radical socialists prevail in the coming US elections, thinking Americans who put their nation and its constitution first will have plenty to resist – see Buchanan & WSJ).

On the water, I paddled left, past the other boat ramp and the fishing dock, then under the bridge. I came to a sort drainpipe through which I paddled into a backwater into which flowed a creek the name of which I do not know. Paddled under a footbridge and around a bend then through a tiny sea of twigs until I ran aground, then back the way I came. A footpath with benches and a bridge passed over and along the creek’s bank, apparently part of the city park complex. 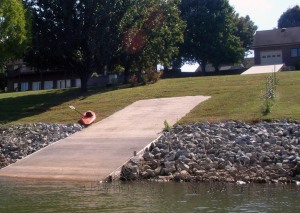 Both my prior trips this way, I ignored Wagner Creek Branch. On the map, it doesn’t look like much. From the water, too many houses on the bank at my right, steep and rocky with fewer houses on my left. I liked the left bank much better. Saw a small kayak unsuitable for covering flatwater distance on a paved private boat ramp behind a too large, too new house that I tried not to covet. On the left bank I saw an eccentrically but attractively painted dock.

Under the road bridge farther upstream I saw a fat, brown groundhog on a rocky shelf next to the water. Looking at me as I greeted it with a quiet and surprised, “Hello,” the creature turned and hastily walked out of sight under an overhanging shelf nearby. Around the next clump of trees and shoreline, I met a man and woman fishing. They said they had caught nothing, and asked a couple of questions about kayaks.

Back out and around the point to Boiling Fork creek, the wind began to howl from the northeast, as NOAA had predicted. I spoke baby words my son uses into the wind, “Eeeachh,” “Eh, Eh,” then “Bwah!” to the water. Early yet, I thought it would be interesting to back to that cave I’d paddled into on June 21, the day I paddled twice to the map’s edge. The water was lower by several feet, yesterday, as Tims Ford reduces volume to winter pool levels. I wasn’t sure I’d be able to make it that far back up Boiling Fork.

Strong wind at my back I thought, “Paddling back against this will be difficult.” Water was sufficiently high to wend my way through Winchester, the slough behind the main street into town, probably Hwy 41-A/64, then past the new Franklin County High School, and to the cave in question. I could have gone farther, but since I’d got such a late start (on the water around 12:15 pm), I’d head back after seeing the cave. I observed tracks in the cave I could not identify. One of the photos I took of the inky blackness beyond the muddy floor shows the gleam of what might have been an animal’s eye. Maybe a raccoon or a small wildcat of the sort indigenous to the region. I observed the cave paintings of a troglodyte band proclaiming themselves “PUNKS” next to red earthen handprints and an alphabetic arrangement I have not yet deciphered in the same medium. Through a cloud of mosquitoes at the cave’s mouth I paddled backwards, observing a large carp in the shallow water unconcerned with my presence.

Stopped out of the wind to eat a snack made of two Slim Jims and a croissant, three generic Fig Newton cookies, and two hands full of salted almonds and raisins. And then back to the boat ramp against the howling wind that sped my passage the other way. Near the roadbridge close to the city park’s boat ramp, I saw two men in a flatbottom, motorized fishing boat. One of them said he was having a pretty good day, had caught no fish, and opined that less the wind, the day would improve.

Shortly thereafter, upon reaching the boat ramp, I wished the wind had been stronger. I saw another of the groundhogs standing on the rocks beside the ramp. I took a picture as the animal quickly walked away.

Paddling back toward the drainpipe on a nameless creek's backwater