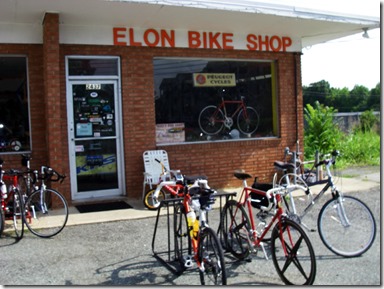 During my visit to Alamance County, North Carolina, in the middle of last month (July 2015), I spent a couple of hours at Elon Bike Shop.  My friend, Eric, had told me about Elon Bike Shop previously – a small, one-man enterprise that selling used bikes out of an older brick roadside store.  Not far from the college (actually a university), Eric said, so there’s likely a whole new crop of buyers each Fall and Spring semester.

Mike, the shop’s owner, does not sell cycling togs, but he is a dealer of new KHS bicycles and carries an impressive array of medium to excellent quality used bikes.  He reports he has a degree in mechanical engineering and that his previous employment was as a designer and builder of machines used to make tools, if memory serves.  Work that, he said, required precision measured in microns.  Mike said he started the shop as a sideline to his regular employment because he enjoys working on and riding bicycles.  Originally, he said, the plan was to build frames in the shop’s basement, but that basement is full of bikes.  Oh yeah, Mike LOVES having his picture taken, as you can see from the photo below. 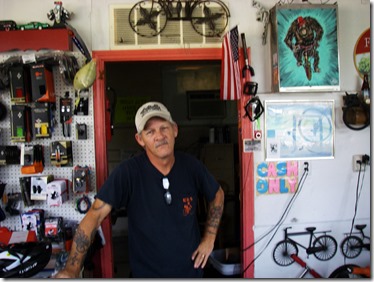 Like Mike O’Neil (owner of Greenway 500 Bike Shop near Muncie, Indiana), Mike at Elon prefers to ride Campagnolo.  Regarding top end groupsets, though, he opined that “SunRace has really stepped up its game” and is producing a quality to groupset to rival the best Shimano has to offer, at a fraction of the price.  His personal bike is is a Litespeed frame built up with Campagnolo Record components.  He’s got some nice, older Italian bikes on his wall of honor (back wall on the right side of the store as you walk in).  Some good bikes on the other walls and the floor, too.

Also, like most of the bike shops I’ve been back to more than once, Mike has fostered a sense of local cycling community.  During my two visits to the shop, I observed him helping new customers with questions related to nearly disposable kids’ bikes, bikes in boxes, as well as interact with some of his regular customers – a local policeman and a couple of guys from a nearby biological specimen company.  Friendly, easy-going, bargain priced bikes, good advice, and an air-conditioned store.

Mike does sell bike accessories, and I bought my son a bell for his Trek Jet 20 to replace the Lightning McQueen bell that finally broke and which came packaged with his first bike helmet (I think he was three, then).  I also bought the boy a set of Mavic 650 wheels with decent hubs for when he’s older.