A scenic stretch of road for trash pick-up

I like doing community service work and, for the record, have never been court or otherwise ordered to it.  One of the things I like best about my membership in the local bicycle club is that it gives me the opportunity to serve the community by participating in various projects.  Sunday, I got to spend the afternoon cleaning up roadside trash along a picturesque highway just outside of town.  Sure, I got my foot wet with muddy ditchwater and skewered one of my hands with thorns, but it did me good to get outside and do a little work.  I would say that 90 percent of the trash I picked up was food and beverage containers – the contents go into the motorist’s mouths and the bottles, cans, and wrappers go out the car windows.

It was pretty out there, and here are a couple of pictures.  Click on them to see full-sized images. 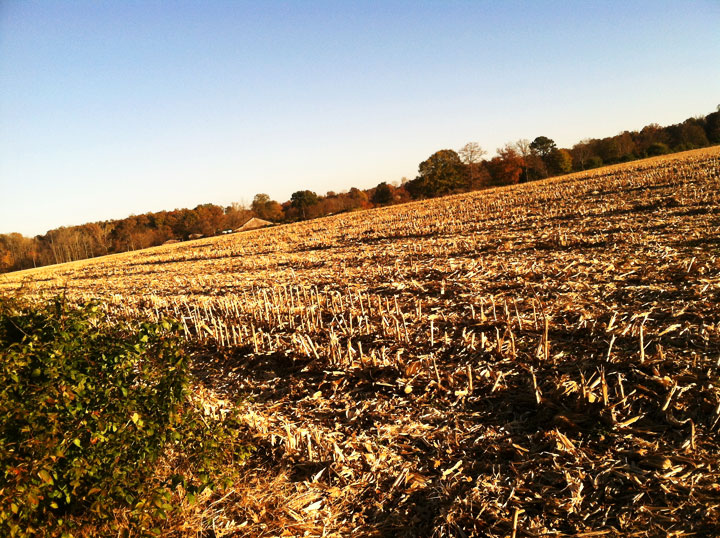 Barns in the distance – same cornfield seen over the hedge 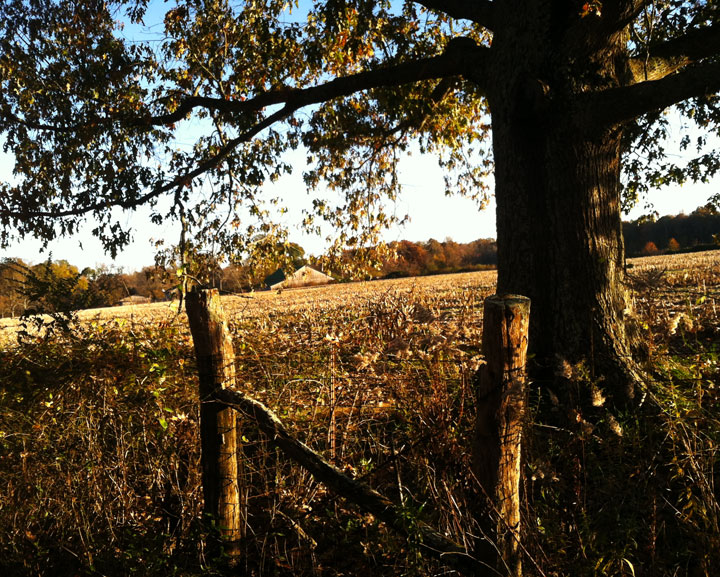 Last Thursday, my Road I.D. sport band, in black, arrived in the mail.  I took pictures of the packaging, as well as the promotional material included with the band, but my photos turned out badly.  Still, bad pictures I can find are better than good pictures I cannot find if they can be used for illustrative purposes.  Two of the pictures I took could not be salvaged, but the others were useable.  Here they are: 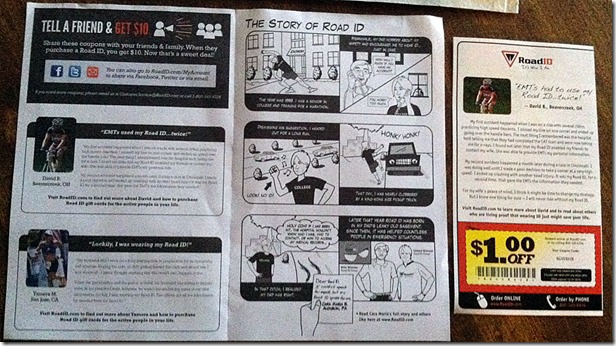 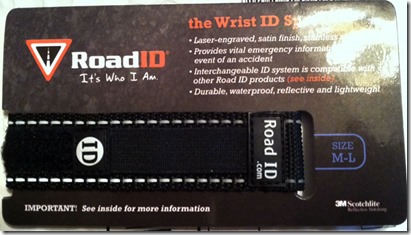 The state of our housekeeping, here at Burnt Down Plantation Estates located in Lovely Stepford, Tennessee, is such that I didn’t keep the packaging after photographing it.  Because of that clutter reduction strategy, there was not a photo re-do.

Once I removed the band from its card, the engraved metal plate was easily migrated from the original bright yellow band to the black band.  I wore it for the first time last Saturday and again yesterday.  Haven’t been getting as many rides in over the past week or so, as I had been previously.

Below are photos of the yellow band, left, and the black band, right.  I normally wear the Road I.D. on my left wrist so its reflective properties have a chance to increase my visibility when riding. 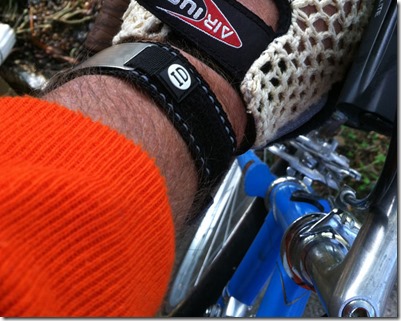 The Miyata’s rolling a lot more smoothly now that I’ve had the hubs serviced – grease and bearings – by the guys at MOAB in Murfreesboro.  Good work done at a reasonable price.

Here are a few pictures from my rides last Saturday and yesterday: 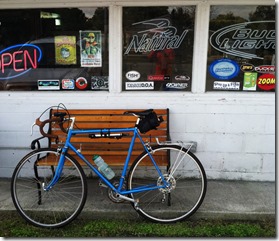 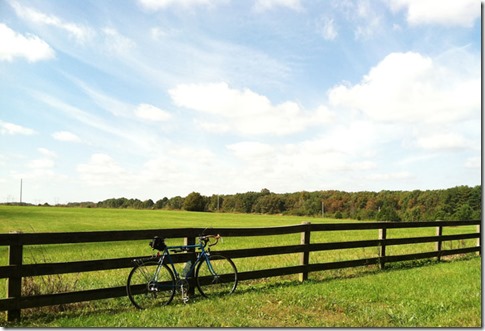 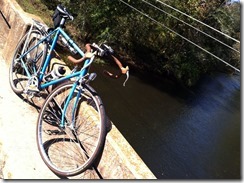 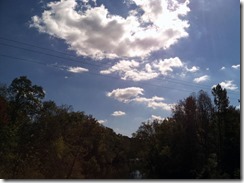 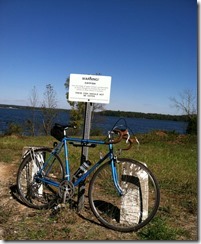 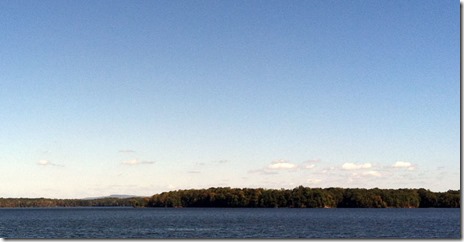 Here are four tree snapshots I took 10 days ago.  I was busy yesterday clearing leaves off the front yard, driveway, and patio; mulching the backyard leaves.  When I returned home after spending a couple of hours away from the house, I found the the property again covered with fallen leaves. 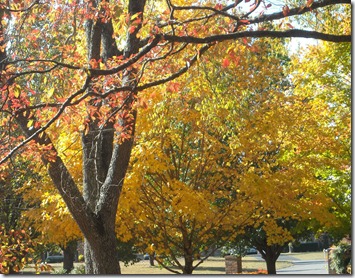 Fall again here at Stepford and I am catching up on work at the office, trying to get enough exercise not to get fat, experimenting with a new camera, and managed to paddle last weekend even though that involved playing hookie from worship service Sunday morning.  I shot some video with the new Pentax Optio W30 while driving earlier this week, and I’ll try to get that posted later this week, but I’ve got some deadline work I must complete by the weekend.  Moses Santiago suggested on a social networking site that I am in need of a lifeline.

I got out and cleaned the rain gutters yesterday morning. After the roof shingles dried, around 11:00, Don came over and fixed the roof. I was going to act as his helper, but got preoccupied degreasing Thursday’s motor, then trying to figure out why it quit running as I’d left it in neutral, hood-open to dry out the engine-compartment. By the time I climbed up the ladder, Don had pretty much got the chimney work done. Then I got hung up trying to figure out whether to pay off this house, list it, sell it, before buying another, or do those things without first paying off the mortgage. Trying to think through emergency funds, investments, Seventy-Six college funding. By that time, Don had completed the work and I wrote him a check. I felt bad leaving him to do that work alone when his goal had probably been, in part, to teach me how to do some of that stuff. Somehow, when I’m trying to manage things, I often manage to disappoint myself and others. Maybe just myself.

Car started again, probably some moisture in the distributor cap that dried off after awhile, because the plug sockets were bone-dry when I checked them, earlier.

Around three o’clock, I loaded the car with gear, and roof-racked Campsis Radicans, took a check out to my Hillsboro mechanic to pay for that replacement radio I got a month or two ago from a smashed 850 Turbo in his field of parts cars. Brian and I talked about parenting, Tommy educated me on the finer points of engine-compartment beautification, I looked at an ’01 Cross-Country and ’89 745 that still had both corner lights and something I’ve never before seen on any 700 series car – the towing-eye cover. Yes, I wanted to buy both cars. Heck, we need a wagon. My dream car has always been a Volvo wagon. Caution-Lady would love a wagon. We could trade or sell Whitecar (’93 940T)…

Yeah, so about an hour later I made it to the put-in below Prairie Plains Road Bridge at Dabbs Ford, and saw something I’ve never before seen on Woods Reservoir – another seakayaker. Guy in a truck with a 17′ Wilderness Systems Unknown-To-Me model kayak on the roof racks. We talked about paddles, the unlikelyhood of meeting another long-boater at Woods. He paddled upstream to fish, and I paddled downstream to challenge myself with the maze of islands down at that end of the lake.

I didn't know turtles were such good climbers

Because I don’t often get on the water this late, I didn’t have any clear idea how much daylight remained to me. I paddled down the Elk, past the small refrigerator that serves as a channel-marker, its door open and empty. Keeping left, I paddled to a shallow place, got out, and inflated the hip pads I’d forgotten to inflate when I launched. Climbed back in and continued. I saw three bird-boxes on posts in backwater channels and along the shore. I saw a fist-sized turtle clinging to the branch of a fallen tree. I saw duck blinds. Heard two sonic booms occurred one quickly after the other; these sounded, if possible higher because their shockwaves were not very intense. I saw herons and three or four ducks.

These red leaves attracted my attention

On the water only an hour and forty-five minutes or so, I didn’t feel like I’d had much of a workout. I drove out Prairie Plains Road to Miller’s Crossing with the low mountains of Grundy County ahead and to my right. 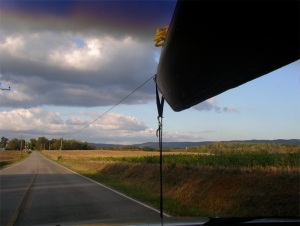 More of the pictures are here.

Up this morning before five, I intended to get on the water by about six-thirty. I was about to make my lunch, I heard the baby making happy sounds and went in to play with him. Way more fun than paddling. I was on the water an hour later than scheduled, and the wind was earlier than usual, blowing from the south or southwest.

My goal today was to paddle as far up Crumpton Creek branch as I could get. I last paddled there with Mike and his son, Jesse, in the spring of ’06, if memory serves. At that time, I was paddling sans rudder, which proved a trial in beam and tailwinds. Water was higher then, and we got maybe three tenths of a mile further than I got today. Leaves turning now fall is here, and released by their trees scattered upon the water’s surface.

Light rain fell some this morning. I saw blue, purple, yellow, and white wildflowers in bloom. All the flowers were very small.

Sonic boom startled me as I rested under the overhang

This morning, under the overhang below the house in the picture, a plane broke the sound barrier and its boom shook the rock. Thought it was a thunderclap right overhead until the next boom from the chase plane again shook the earth. A startled fish jumped beside my bow.

I ate my lunch seated on a rock in the middle of Crumpton Creek an easy walk upstream of where I beached the kayak. Then I paddled back to the car. Wind almost took the red boat off my car’s roof as I attempted to strap it down.

Later this afternoon we looked at houses, found one we think we like enough to make an offer on. We may put our house on the market next week.