I bought a canoe the day before yesterday at Eaton, Ohio.  My first hardshell paddle craft, the canoe is a 1974 Grumman 17’ double-ender.  The boat has two seats, bow and stern, as well as three thwarts.  Some of the same machinery Grumman used to stretch aluminum for World War II carrier-based fighter planes stretched the aluminum used in my new boat’s hull.  Although I could count them, it is easier to say there are innumerable small rivets holding the hull together and the “standard keel” to the hull.  Monday night, while sitting at the dinner table, we were discussing whether we would buy the canoe and I kidded my wife telling her I would name the boat for her.  “It’s about time you named one of your boats after me!” she said laughing.

On Monday, I’d driven to Eaton to look at the Grumman which I’d found on Craig’s List.  The seller was asking more than I wanted to pay, but the other canoes that were priced more reasonably had already sold, or the seller was leaving town for a week that day.  The canoes that hadn’t sold were the plastic variety with cup-holders and built-in “coolers” sold at Dick’s Sporting Goods or Wal-Mart, or they had holes and looked like they’d been used as bongs.

Seeing the 17’ behemoth on sawhorses at chest level, the Grumman looked overwhelmingly huge.  Kind of cooled me on the idea of buying a canoe.  Huge boat.  I’m the only one in the family who usually has any interest in paddling.  The seller said he had some life-jackets, paddles, and kayak he would throw in to complete the deal.  On the phone, the kayak sounded pretty good, but when I looked at it, it had two large holes on the bottom fixed with Bondo.  Anyway, I didn’t think there’d be room on the racks for both boats.  I told the guy I’d have to sleep on it since he wasn’t willing, and I didn’t seriously expect him to be willing, to accept an out of state check.  Which is how my wife and I came to be discussing the boat at the dinner table Monday night.

Tuesday I woke up thinking there was no way I was willing to pay the guy’s asking price, roughly a third of what the boat would have cost new.  I called the seller and told him I couldn’t pay what he was asking and offered him a lower price I didn’t think he’d accept.  We compromised, and although I think I paid about $50.00 more than I should have, the deal was still reasonable.  My father-in-law and I drove out to Eaton again late Tuesday morning and, before money changed hands, we checked to make sure the huge canoe would fit on the 850’s roofracks; it did, easily.  That’s the photo of the test, above.

The Grumman secured easily and none of the straps or tie-downs worked seriously loose during the drive back.  No problems with handling.  Actually, handling was not significantly affected.  The 850 with RZ96 on the racks handles a little worse.  Heavy stuff in the trunk, however, has a markedly worse effect than boat or boats on the roofracks.

Mid-morning yesterday I drove to Canoe Country at Daleville and paid them for a pair of cheap water shoes and $13.00 shuttle for the ride back, put in at the outfitter’s property, and paddled/floated down to Anderson.  I was concerned that the 17 footer would un-paddle-able solo, but I turned it around and paddled it from the front seat and the stern-as-bow.

This part of the Midwest has this week had daytime temperatures in the mid-nineties.  I took three pieces of pizza, a small bag with almonds and peanuts, and about a gallon of water in addition to a couple of small drybags.  Not much weight in the boat besides my own.

Edgewater Park at Anderson is seven bridges downstream from the put in at Daleville, an easy 11 or so miles.  I have paddled/floated this section several time over the past few years, usually in rented kayaks that look like slippers, and once in a 16’ Nova Craft or Old Towne rented canoe.  In several places the river is punctuated by mild riffles.  The water was running about four to four and a half feet at the gauge on Wednesday.  Enough water that I was able to explore a previously inaccessible backwater into which the river flowed.

I experimented with paddling from the rear seat, from a kneeling position braced against the thwart forward of my seat, and once, when I failed to “read the river” aright, using the long paddle included with the canoe to pole the boat from a standing position to get past some rocks I’d got hung up on.  The Grumman was not a problem to paddle solo, and I obtained the best results with a short paddle while kneeling braced against the thwart near the boat’s center.  Some kind of closed-cell padding would have made that more comfortable, but was not really necessary.  I was able to lean the canoe from the central position for faster turning.  Torso rotation worked with a single-bladed paddle as it does with a kayak paddle, and I modified a couple of other techniques of form from kayaking to move the large canoe.

When we drove north earlier in the week I packed a couple of fifty or so year old canoe paddles.  Miss Blanche gave them to me, although I’d offered to pay for them.  They were in the attic of her house, and had belonged to her late husband, who’d used them to propel whatever non-motorized craft he’d been wont to fish from.  I started stripping them, because they appeared dried out and their varnish bubbled in places, the week before we left.

Although I hadn’t completed the process by Wednesday, I took along with me the darker of the two paddles, the one with the squared blade and better-carved handle, to see how it would work.  Also took the long laminated wood paddle the seller included with the canoe.  I know next to nothing about canoe paddles, so asked the guy at Canoe Country who said that longer paddles are more commonly used in deeper water like lakes or possibly large ponds.
The shorter paddles are used in shallower moving water like rivers.  He said he thought the shorter paddle was reasonably sized for river paddling the Grumman.

Standing in the boat was pretty easy, but I’m not sure how efficient or good an idea it is to paddle it standing.  I have seen pictures of paddlers standing a canoe’s gunwales, or with one foot on a gunwale and a knee in the boat.  Not sure of the utility of either technique, but it might be interesting to try out another day.

The previous evening my wife, her sister, and her mother had been watching an old Mel Gibson film, “Forever Young,” on one of the cable or satellite channels.  I caught about the last five minutes of the movie’s happy but implausible ending.  Two things about that movie, which I’d already seen, struck me.  The first is that the things I see today in the town where I live that date from the 1930s and ‘40s were once new and looked new.  The second is that the film contrasts the general competence of people who came of age in the early part of the last century with the general ineptitude of those who came of age during its latter decades.

I saw something shiny in the water after the sixth bridge.  It turned out to be the left rear quarter section of a plastic model B-17 Flying Fortress.  Those little windows at the airplane’s stern-section or tail-section clued me in, but the almost square opening forward for a waist-gunner also helped with identification.  The small replica bomber’s last fight was, I imagined, initiated by a bored child flinging the airplane out of a car window as the vehicle crossed the bridge overhead.  Or perhaps the youngster was interested in the model’s potential for flight.  At least it spent a few seconds aloft before shattering on the rocks below either this bridge or another somewhere upstream.

The broken airplane (even though the bomber in the movie is a B-25) started me on a train of thought about actor Mel Gibson’s recent very public living problems.  I’ve always liked the guy’s movies since Gallipoli, which I saw when I was young drunkard in the 1980s, through The Passion of The Christ, although the latter contained mythological elements that have no provenance in orthodox theology as I understand it.  I hope the guy manages to overcome whatever’s tormenting him and has a better end than the plastic B-17. 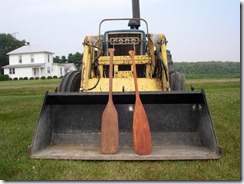 Yesterday I drove to town to buy some Tung oil to finish the canoe paddles after I’d finished stripping and sanding them.  The hardware store in the closest big town was out of Tung oil but could have sold me a gallon of linseed oil.  They directed me to a hardware store in another town, which was what I preferred to the local Wal-Mart.  Thing about Wal-Marts is that they seem to be filled at all hours with incompetent-looking people who don’t appear to have much direction. 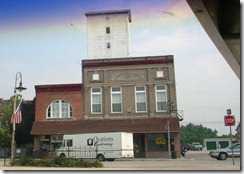 The guy at the hardware store (first of the three pictures above), knew my father-in-law and his father-in-law, had gone to church some years ago with that aged gentleman, and grew up a couple of miles north of my wife’s family farm.  That’s the canoe on the 850’s roof seen through the car’s windshield.

Today is Friday, and we’d planned to take the canoe to the lake nearby to paddle with the kids as a watery supplement to pontoon-boat rental.  Weather radar informs me that we’ll probably not paddle today.  I will probably help out at the barn cleaning farm implements.

About my black and white photos – they start out as color digital photos, and I discard the color information or make other adjustments.