For the past three or so weeks I’ve had dental problems attributable to degradation of a filling in one of my back molars, something I became aware of when a sunflower-seed bit of that molar came loose while flossing one morning.  No pain then did I have.  The broken bit of molar looked like a small piece of bone; with my tongue, though, I could feel the jagged place in the tooth where it had been.  As a child and young teenager, my dental hygiene was evidently bad resulting in numerous fillings.  This filling probably had been working loose due to small cavity behind it.  Because the part that broke off was on the tooth’s chewing surface, near the back of the molar, eating resulted in some food getting stuck down between it and the tooth behind it.  In a day or two, I had a lot of pain when eating.  My dental hygiene as an adult is excellent – frequent flossing, frequent brushing, etc.

Pain extended to my ear, jaw, neck, and throat.  After a few days of this, I called a new dentist in neighboring Pixilie who had been recommended by a near and trusted relative.  A new dentist because the practitioner of dental arts I’d formerly seen for checkups, crown, cleanings, had recently exhibited behavior in another sphere of activity that indicated loss of contact with the rails.  The new guy was booked up until mid-June, but I made an appointment anyway.  His office worker called a day or two later to ask whether I wanted to come in to take a cancellation.  Yup.  Although my teeth had no current plaque buildup, x-rays revealed a cavity near the molar’s nerve likely necessitating a root-canal.  I remember my dad suffered as a result of this type dental procedure when I was a kid in the Seventies.  "This isn’t your dad’s root-canal," the blonde dental assistant said.  The dentist said it is possible the problem can be corrected with a filling, but would schedule time for the nerve-killing procedure just in case.  In mid-June.  Estimated cost of root-canal procedure:  $925.

Although I’d fully informed the dentist about the unresolved pain and its extent, he prescribed no antibiotics.  Within two days of the examination and cleaning, to use my parents’ phrase remembered from childhood, I was about to come unglued with the pain.  No amount of ibuprofen or acetaminophen provided relief.  I quickly consumed most of the soft foods (oranges, bananas, yogurt) in the house.  I called the dentist back and he prescribed a drug called Norco and a strong antibiotic.

Before calling, I’d been able to ride ignoring the pain without too much difficulty, but the pain had become pretty severe by the time I called the dentist again.  I couldn’t even eat a salad without anything in it that crunched.  I began to wonder how people who have chronic dental pain and problems obtain adequate nutrition, especially those unable to afford dentistry.  To the good, in the back of my mind, I began to see the possibility I’d lose a couple of pounds by the end of this ordeal.  Still, the pliers, vice-grips, and channel-locks in my toolbox were speaking their problem-solving siren song.  Instead, I soaked a Q-tip with DMSO and applied it to the affected area.  Immediate relief.  I used DMSO on the Monday and on the Tuesday the dentist called in the scrip.

Norco, unlike the opiate prescribed me after shoulder arthroscopy several years back, didn’t make me throw up and didn’t completely stop my gut’s peristaltic wave.  It numbed the pain sufficiently that I no longer found it in the forefront of my consciousness.   I went for a ride.

That Tuesday, toward the end of a pretty easy 12.66 mile ride with no significant hills, I rode into the Bramblewood subdivision, as I often do and which is a throwback from my first "longer" rides on the Trek Navigator 1.0 I used to ride, to add an extra mile or two.  There’s this stretch leaving a cul-de-sac that I like to ride as fast as I can.  It’s a long, easy hill with a left turn up a small hill at the intersection.  Usually nothing’s coming, but I usually have the presence of mind to look.  This time I was flying up the hill concentrating only on my pedaling form and speed (about 20 mph there, according to Cyclemeter), and failed to look at the intersection until upon it.  A shiny blonde woman (you know, the kind that looks like a fashion mannequin come to life without the sense of humor and humanity exhibited by the average clothes rack) in a black Lexus was yacking on her cellular phone and approaching the intersection at about 30 mph.  I looked up in time to apply brakes while swerving and avoiding both the blonde and the smoking (as in cigarette, not hot) woman in the neglected sports coupe behind her all while making the mea culpa face and mouthing "sorry" to the woman in the Lexus who actually looked human for an instant because surprised.

A little sobered, I rode the two miles home thinking, "This is the last time I ride after having used that pain-killer."

The following day, Wednesday, I took the pain med after dropping my son off at school, totally unwilling to pilot a car under the drug’s influence.  The medication completely destroyed my sense of motivation, and I accomplished very little on Wednesday.  I think I took one on Tuesday and two on Wednesday.  I didn’t ride Wednesday, and didn’t make it to Bible study in Pixilie that evening.

On Thursday, I used only ibuprofen.  Also, the antibiotic has attacked the infection and inflammation and pain were both much reduced.  That said, I did pretty much eat fruit, yogurt, vegetables, oatmeal yesterday.  I rode about 24 miles – from my house to Pixilie on the old road that predates the four-lane now connecting Stepford to the Pot County seat.  No worries – a lot of headwind, some rain, just under 15 mph average speed.

Over the following weekend, I took the Rx pain meds twice.  My wife reported marked personality change in the form of ill-temper, impatience, and a tendency to shout when annoyed.  At one point, I observed my own overreaction and decided that I was done with the scrip.  I’ve since used only acetaminophen and ibuprofen, alternating between them.   By month’s end, this root-canal business should be in my “rearview mirror.” 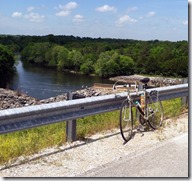 Yesterday afternoon I started a physical therapy program after a range of motion evaluation  – cervical spine, shoulder and arm strength, etc.  Painful and uncomfortable massage.  Patient education about posture – that was the most difficult – understanding that my habitual sitting posture has over the years resulted in chronic pain that thinks Ibuprofen and Acetaminophen are candy.  Spastic trapezius.

Today I’ve been practicing the exercises the therapist prescribed.

I’ve procrastinated some, but also got some paperwork completed that has been left too long undone.

The physical therapist told me not to kayak for a “short time.”  Maybe some time this month I’ll get on the water.