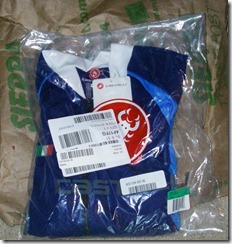 Because I liked the idea of zippered rear and three other pockets, as well as having something to wear that doesn’t flap like my overlarge sky-blue and stodgy-looking paddling shirt, last weekend I bought a Castelli bicycling jersey from Sierra Trading Post and it arrived Thursday by least expensive shipping option.  That’s it in the picture above, still in its bag.  I could’ve got it in black and white, and myself tend to like the harlequinesque look, but I preferred the blue.  The jersey isn’t as unflattering on as I thought it would be; I don’t much like the scorpion logo, but do like the little Italian flag on the garment’s right side.  Now the problem is that I can’t wear a cycling jersey without cycling shorts – I’ve placed a Father’s Day request for a pair of them.

Yesterday afternoon I went for a ride and tackled a hill that’s intimidated me since I first rode down it to a small “lake” a few miles from the house.  In the past, I’ve ridden down to the lake, then up and around veering right, then left, up a less steep hill.  Yesterday I rode fast down the zig-zag hill to the lake, then up to my left – and up.  I tried to super inflate my lungs.  In the lowest gear, a sprocket “popped,” then the chain caught a gear and I was able to maintain momentum.  Again a “pop” but the chain caught before I lost momentum, and I kept pedaling.  My thighs hurt on the outsides not far below the hips by the time I’d reached the crest, and I kept going. 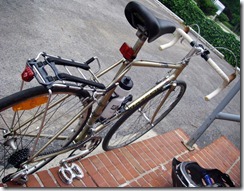 Eventually the road leveled out a bit; I didn’t stop until I got to an industrial building a mile or two further on where I dismounted, drank a little water, and rested for about four minutes.  I snapped a picture of the bicycle, also at rest.  You’ll note, if you look for it, that I’ve clipped the rear light to the rack – the velcro straps included for the purpose of securing the Blackburn Flea lights to seatpost or handlebar are not well-enough made to last more than a few months.  In fact one of them broke the first week I got the lights.  I stopped early yesterday at a computer supply store and bought some Belkin velcro cable-ties, but although they were the correct width and length, they were not suitable for the task.

So far, the very best shoes I’ve found for bicycling are not those specifically manufactured for use while bicycling, but are an old pair of New Balance 806 trail-running shoes I normally use for painting and yard-work.  The soles are stiffer than the New Balance shoes I purchased last year or the year before, but sufficiently flexible that I can feel the pedals through them.  If you’ve got a pair under a bed somewhere, I suggest you get them out and try them.  Here’re a couple of pictures.  My guess is that New Balance no longer makes them like this.  Maybe you can get a pair on Ebay (not my size, those).