Last week I worked at Gallatin.  To the good, my colleagues at that place are a congenial group of professionals oriented to reality and who appear to manifest the sort of ordinary goodwill that is growing ever more difficult to discern in the agency that employs me.  Certainly, working conditions there are considerably better than those in the place my position is currently housed.  Also to the good, I got to take a bike and on every one of the four evenings I stayed over, I rode from the Hampton Inn parking lot across Nashville Pike and down Lock 4 Road to Sumner County Park and back again before supper.  Each evening, I rode close to deer in the park that did not appear frightened of me.  I had lunch a couple of days with the man at Gallatin who performs the work I do.  One day I ate lunch at Top Hog Barbecue.  I finished reading a biography of William Carey.  I worked with very interesting clients.  My hotel’s staff was efficient and friendly, the breakfasts served were not bad, parking was free, and the hotel, itself, was within easy walking distance to a number of reasonably priced chain restaurants.  To the bad, I spent the week away from my family.  Also, the contrast between a normal working environment and my own office will be horribly evident when I return there tomorrow. 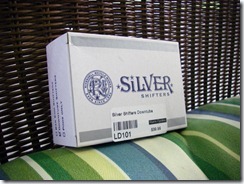 Because the shifters on the Razesa need replaced (and I ordered a set of Rivendell Silver [downtube] Shifters that arrived while I was gone), I took the Miyata 610 with me.  I replaced the Selle Italia racing saddle with a tacky-looking Mongoose mountain bike saddle and find it improved ride comfort considerably.  The Miyata appears to have all of its original Sun Tour components; they have a utilitarian beauty.  I took a lot of bike pictures – click on the thumbnails to see the full-sized images. 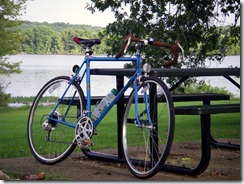 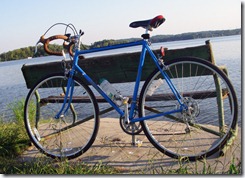 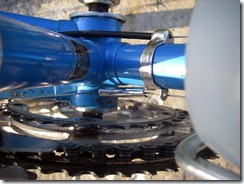 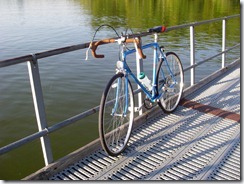 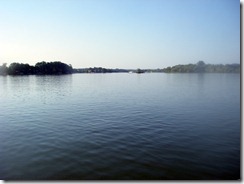 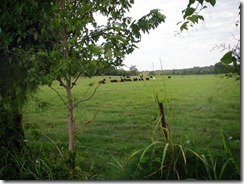 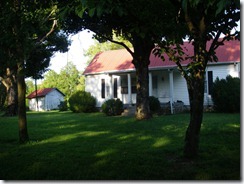 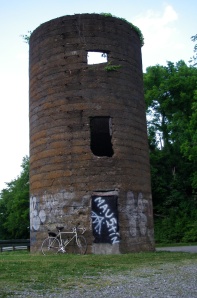 The villagers didn't pay any attention to me, Thursday, and no one pursued me to this place.

Thursday evening, I checked with the Gallatin locals who said, “When they issue a tornado warning, then you should pay attention,” but said they thought the severe thunderstorm wouldn’t materialize.  I was glad when they said that and headed out Nashville Pike, feeling subversive riding in traffic, to a street named Something Circle, between a Wendy’s fast food restaurant and either a strip mall or a sit-down chain restaurant (all that commercial stuff looks alike on a busy four-lane).

Certainly it was warm enough, outside, and would have been humid if it hadn’t been windy.  I welcomed the wind because it made flight problematic for the variety of little, whitish colored gnats that swarm in the area of an evening.  The neighborhoods I rode through were pleasant and shady – mostly attractive, 40 year-old Tennessee brick houses with established lawns and leafy trees for landscaping.

I found a street that cut through to Lock 4 Road, which runs the length of a peninsula of sorts to Sumner County Park.  I turned right and pedaled to the park over a series of more and steeper hills than I am used to riding here at Stepford.  This being the third time I rode the hills, I found them easier than I had when first encountered Monday night.  Near the road’s end, not far from the entrance of the park, I negotiated a bolted-down speed bump, riding the six inches of pavement between its end and the ditch.

At the park, I saw an old man fishing at a dock with a little boy.  I saw young people sitting across from each other at a covered picnic area.  I saw two men fishing at the lake’s shore.  The water looked calm.  The grassy slopes leading down to the water’s edge looked like a good place to launch a kayak.  I rode on back out of the park past where mountain-bike trails crossed the paved park road.  At Lock 4 Road, I turned right and pedaled a short way and right again up a gravel road to the silo pictured above.  Although I am no fan of horror movies, even the early Universal films of that genre, I found myself thinking of Boris Karloff, whose stage name inspired my Internet moniker.  I snapped a couple of pictures of my Razesa by the dilapidated concrete structure, then rode back to the hotel.