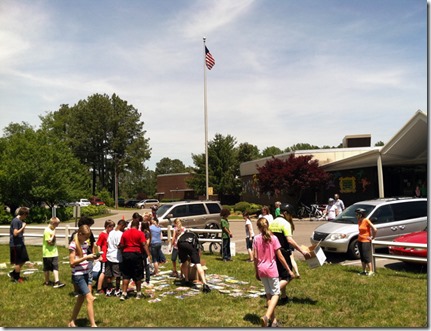 Above: Fifth grade students browse Ride for Reading books at their school

The local bike club last Wednesday helped out with a Ride to School Day at one of the elementary schools in the town where I live.  I volunteered to help out and was assigned an assembly point where I would assist in some way and ride along to escort the kids along a pre-determined route to the school.  After our warmer weather here in Southern Middle Tennessee, the early morning temperature of about 55 degrees felt too cool to me as I wore shorts and a T-shirt.  I met a crossing guard on site who told me he has for 10 years stood at that intersection shepherding children across the street on their way to school.  As kids rode by on their way to middle school or arrived with their parents for the bike train, he greeted many of them by name and remarked how quickly they grow up.

The elementary school’s principal drove up and I helped her unload about 15 bicycle helmets as she had “bought every one they had at Wal-Mart” knowing that most of the children who would show up for this activity would not have helmets.  Her school has the highest number of children on the free-and-reduced breakfast and lunch program and was the one that held the first Ride for Reading, which I mentioned in this post.

I got the helmets out of their packaging and arranged them in rows for the kids to choose from.  Kids started to arrive with their parents and the parents stuck around until we set off.  I helped a few of the kids get their helmets adjusted.  A note to helmet manufacturers:  Make helmet adjustments easier kids’ helmets.  One little girl had a push-scooter, most had children’s BMX-style bikes several of which looked like they’d been repainted by hand according to the preference of the owner.  A girl, the one with the scooter, talked about how happy she was that a few pink helmets because girls like pretty, colorful things and she had decorated her room with peace-signs.  One little boy had a set of pedals on his bike that I envied for my mountain bike.

We set off for the school with a police escort – our local officers who ride bike patrol for events have some pretty good Trek 29ers – at the front and I rode along at the end.  We had a couple of stragglers and late-arrivers, as well as a little girl who walked and trotted along beside one of her friends most of the way.  Because my Bridgestone is in pieces now due to headset trauma and difficulty fitting replacement parts, I rode the Miyata 610 which turned out not to be a good choice for riding slowly with numerous stops on sidewalks.  We had no crashes or other mishaps, and all the riders from three different assembly points converged on the school at about the same time.  They were welcomed by the principal and teachers, were given certificates and breakfast.  Here are a few pictures from the ride: 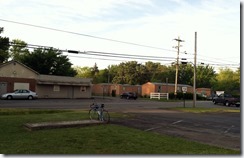 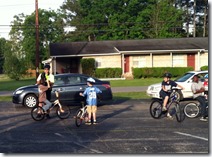 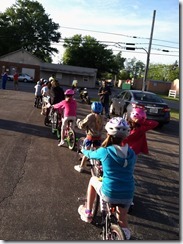 Last Thursday, bicycle club members again participated in a Ride for Reading book distribution at another of the city’s elementary schools.  I rode the gold Razesa, for the first time riding it with heavily loaded panniers.  Handled just fine.  This time, instead of trying to set books neatly on tables only to see them slide off in piles, we were able to place the books on the lawn for easier browsing.  Here are a few pictures from the event: