For about the past three or four weeks, on weekends, I’ve been consistently getting up around 4:00 am and either riding my bike or driving to the gym Saturdays and Sundays.  Been a little hit or miss before that.  No idea why I’ve had better motivation recently than formerly.  My doctor told me about a year ago I should concentrate on strengthening my back and rotator-cuffs to alleviate bilateral shoulder pain he attributed, in part, to having overdeveloped my pectorals.  But to look at me, you wouldn’t think so.   Still, I’ve complied with his advice and my posture has improved as well as, a little bit, that shoulder pain.

My workouts have lasted about an hour and a half, and I incorporate legs and abs, some tricep and chest, with my primary lat, back, and bicep work.  Am I a glorious specimen of beautiful middle-aged masculinity?  Not so much, although I feel better – it’s good to feel strong.   I’m gaining weight, but my clothes still fit, so some of that must be muscle.

This was our year to spend Thanksgiving with my wife’s family but we stayed home for the holiday because of my work schedule.  We spent a really pleasant day with my family, instead.  Friday, my wife finished decorating the house for Christmas and my son and I went for a bike ride around the neighborhoods.  We stopped by and visited my godparents and then rode home when the boy looked like he was about to fall asleep.  He’s not ridden much over the past couple of months, so he had a hard time riding back up hill.

By some miracle or fluke of predestination and providence, I turned out not to be a complete monster.  I’ve written in this space, at some time or other, that for me or someone like me, the great adventure is to live the ordinary life in an ordinary way.  You can probably not grasp how unimaginable an outcome that seemed for me when I was young or how much joy it brings me now.  It’s what I’m daily most thankful for – my wife, son, our health, meaningful work for both my wife and myself, a modest house in a modest neighborhood, self-directed recreational activities like cycling, paddling, strength training, reading, a small and extremely Calvinistic congregation where we are accepted and maybe for the most part liked and to which we contribute by participation, prayers, offerings.  Also my extended family – much more important to me now in middle age than it seemed when I was a young man.

I have a lot to be grateful for and I hope you do, too.

I got up around 4:00 a.m. this morning and yesterday morning planning to get a cup of coffee and ride my bike to the gym, but instead, both yesterday and today, I had my coffee and read the news.  This morning I think I will work out here at the house, but yesterday I engaged in no fitness activities whatsoever.  Did some other stuff like help out a neighbor and attend my son’s first soccer game of the season, then socialized with other parents afterward at the local Chic-fil-A restaurant.  I almost never socialize with anyone, but sort of enjoyed the time I spent with both my own family and others from the sportsfield group.

My wife, who earlier in the morning looked after her friend’s three young children d/t a family emergency, wanted me to check an email we received to determine whether we’d had our data compromised in the recent Equifax data breach and I got side-tracked deleting some 2200 emails from the family email account my wife uses.  There’re probably about that many more that need purged.  No, we didn’t get any Equifax notification.

Finally, I tore myself away from the computer and drove out to my mechanic’s garage on the off-chance that he’d be there working on a Saturday.  He often does work Saturdays and holidays, but doesn’t answer the phone on those days.  The car I’ve been driving since my green ’98 XC70 was totaled last summer by a young woman who had lterally gone off her meds a week or two prior to the wreck.

Apparently some previous owner had a mechanic (or did it himself) who hard-wired one of the low-been headlight bulbs.  Now, after seven years, it’s gone out.  I ordered some replacement bulbs to change them out, myself, but found yesterday morning the wired-in problem.  Hence the need for professional intervention.  I may drive out the garage again, today, because the place was closed up when I got there, yesterday.

On the way back to the house, I stopped at a produce stand and got my wife some tomatoes for BLT sandwiches.  Our backyard garden hasn’t produced much.  Three green tomatoes out there, now.  Not much else besides, although the various plants seem to be okay.  About a 30 mile round trip, but not completely wasted.  I hate driving around with a headlight out – it feels shameful not having something that basic tended to.

Did I mention I’ve been reading a lot, this year?  Mostly Star Wars “Legends” novels – way more entertaining than the lame SJW-inspired Disney sponsored novels that are now, supposedly, “canon.”  By “reading a lot” I mean wasting a lot of time reading novels like some people eat candy.  My mind is probably getting fat and lazy and my brain fit for maybe the glass-jar equivalent of soft, fast-food and ice-cream stained couch.  Did I mention I had a milk-shake yesterday at lunch.  See?  It’s not just my brain that’s deteriorating here.

My wife reports my son has complained that I’ve been spending too much time reading and not enough time playing with him – hunting each other with Nerf guns outside Son-on-Scooter versus Dad-on-Foot dodge-the-scooter driveway game; backyard target shooting with the Tippman 98 (ours has been modified for killing grackles); building with Lego blocks, etc.  So, late yesterday afternoon when my son was too worn out from a day playing soccer and running around outside with friends while watching other teams’ games, I got another Mojang account so he and I could multi-play Minecraft on our LAN.  THAT was pretty time-consuming.

Next week, I’m scheduled to preach at our congregation’s worship meeting.  I don’t think I’m very good at that kind of speaking.

I think part of what’s getting in the way of my preferred leisure activities is that I know I’ve got two or three responsibilities I’ve got to carry out and have been procrastinating about getting them done.  That’s weighing on me and obstructing the clarity of purpose and function that equals motivation I seem to’ve been lacking recently.  To the good, I haven’t been binge-watching series on Netflix.

That’s all for today.

If it’s called a seatpost, why is the thing attached to it called a saddle, in bicycling terminology?

The Mongoose mountain bike saddle I’ve had on the Miyata 610 for almost the past year, I found, causes numbness to my external genitalia after rides longer than 15 or so miles.  I find it unsettling to feel a twinge and, when adjusting the position of the aforesaid parts, feel nothing from them when they are moved.  That can’t be healthy.  So, after having some time ago read this review by All Seasons Cyclist, I decided to buy one.  Turns out, however, the product I bought on Amazon was the Classic or “comfort” version of the saddle.

Last Friday, after work, I took a 19.48 mile through the local hills to try it out.  It is too wide for comfortable peddling and the rails do not fit well in the Miyata’s seat-clamp.  I probably would have been happier with the Competition model.  When I was buying, though, I found its much greater cost off-putting.  Nevertheless, after the end of my ride and during the ride, I experienced no numbness, which is to the good.  The test ride included rough portions of badly paved and then unpaved road.  Below are some photos comparing the Mongoose to the Planet Bike saddle, and of the saddle on the Miyata. 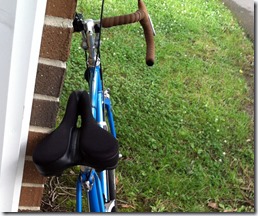 My test ride took me past a yardsale, kind of out in the country, and two bikes on display out in the yard caught my eye.  One of them turned out to be a Specialized Crossroads of uncertain age and the other, an apparently decades old lugged steel mixtie framed bike identified by its decals as a Suteki Track 10 with Shimano componenet – 600 derailleurs, Tourney brakes, couldn’t tell which stem-shift levers.  I agreed to buy it from the owner and returned in the station wagon later to get it.  It looks just like the one pictured below, said picture cadged from somebody else’s site, but I’ve forgotten where I got the image.  When the bike I bought is made rideable – new cables, brake and shift, tires, tubes, etc., I’ll post some more pictures.  I’m hoping my wife likes the bike when it’s done. 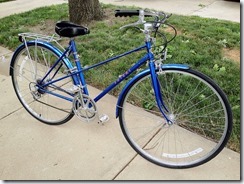 I’ve found the hardest rides for me to find motivation to complete are those short, 3.3 mile rides around all the streets in my subdivision.  It’s an easy ride with almost no necessary stops and a few, not very steep, hills.  I rode it Monday evening and it took all my willpower to finish after the first mile.  Strange.