Back in the summer of 2015, I was averaging about a hundred miles a week and I was still the slowest guy in the bike club on group rides, no matter what bike I rode.  Later in the season, just before Fall, I started getting sick. Like a knucklehead, I googled my symptoms and came up with viral spinal meningitis.  My doctor’s nurse practitioner diagnosed instead seasonal allergic rhinitis.  I still think I was probably right, but whatever the problem was, I got over it.  Still, the pounding heart thing while riding abrupt and steep (for me) hills niggled at the back of my mind.  In 2016, about a year later, painful irregular heartbeats occurring at least once a day prompted a lot of diagnostic procedures by a good cardiologist in a neighboring county.  Turns out at some time or other, I’d had a heart attack but damage was not too bad and my arteries were clear.

Anyway, after Fall of 2015, I quit riding for a while and then started again riding only for fun.  I think this year my longest ride’s been about 22-24 miles.

This year, I’ve got a new solo kayak, have taken my son paddling a couple of times, have started working out at a local gymnasium, and continue to ride most weekdays from work at lunch with a few after work and weekend rides.  My son still doesn’t enjoy riding for exercise – mostly, he wants to ride to a destination for nerf-gun war or in hopes of finding a disc some cannabis use disordered frisbee-golfer has lost.

Here’re a couple of photos from 2016 – the cotton field picture is from a lunch ride while I was working in a rural Southern Middle Tennessee county; the dredge photo’s taken beside a small, decorative lake that’s got clogged up with mud and lily pads. 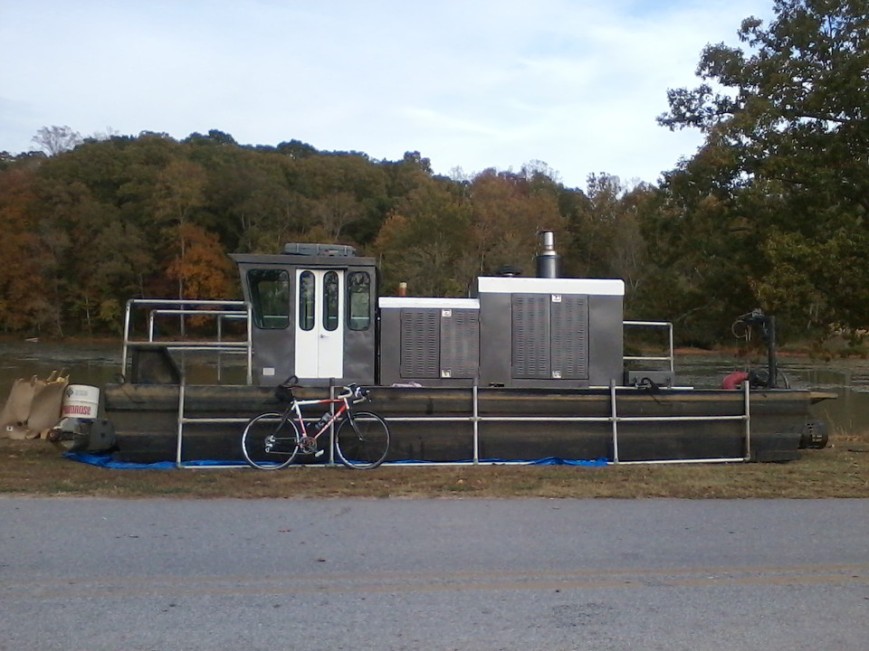