In a previous post I mentioned that Cathi Davis, customer service rep at Mac of All Trades, said she was going to send me another optical drive to replace the balky Pioneer device that shipped with the computer.

Remember, I never asked for a replacement, simply followed up a telephone call in which I discussed with her problems I’d been having with the drive’s apparent inability to burn or play through DVDs or CDs.  Followed up with an email telling her that the drive actually worked after I’d run a cheesy Maxell disc cleaner in the drive, and attached screen-shots of Toast 7 and Toast 8.

The replacement, a Sony DVD RW DW-Q28A, arrived in today’s mail.  I’d been planning to take a three or four mile walk, but was unable or unwilling to defer gratification.  I immediately set to work on replacing the Pioneer with the Sony.

Ms. Davis had already assured me that breaking the seal on the computer’s access panel to do the work would not void the remainder of my 30-day hardware warranty.

Unlike the two older G4s I’ve had (GigaBit Ethernet dual 450 & Dual 1.0 Ghz Mirror Drive Door), the Power Mac G5 access panel is not hinged.  Pull the lever on the back of the box, and the panel is freed for removal.  The G5’s somewhat unprepossessing, jumbo-sized exterior (it dwarfs my MDD G4) belies the box’s feng shui clean interior.   All modular and easy.   Like something from a childhood field-trip to a modern milk processing plant, or possibly an office-building in Jacques Tati’s Playtime. 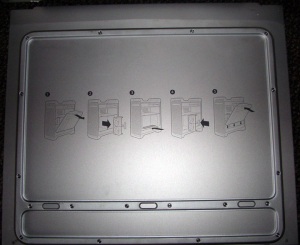 To my surprise, I found hieroglyphics on the inside of the access panel once I’d taken it off the computer and set it on the floor.  Nice industrial artwork.

Not much space to work in there

As I’d been warned to expect, there wasn’t much space to work back of the Pioneer drive.  Used an antique pair of barber scissors (closed, of course) to pry the data cable’s far edge loose – beyond my longest finger’s reach.  That loose, it was a simple matter to open the release catches, slide the drive out toward me, and remove the power cable.

The data cable’d been stuck to the top of the Pioneer drive, and pulled loose from its attachment point on the motherboard, if that’s what they’re still called, during the removal process.

The Pioneer had been jumpered Cable Select, and that’s how the Sony shipped. 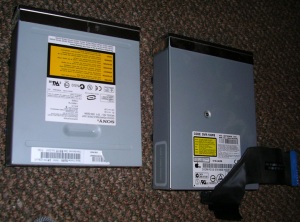 Sony and Pioneer optical drives, side by side - note data cable stuck to the Pioneer

Because the Sony is shorter than the Pioneer, it was easy to get it installed and hooked up.  Sticking the data cable to the top of the Sony mis-matched the cable’s crease and the drive’s edge, again because of the Sony’s different dimensions.  Attaching the cable to the motherboard was not a problem, as I’d attached it first to the drive, and had already pushed it through it’s slot into position.

Put the clear plastic cover in place, then the access panel, hooked up peripherals, plugged it in, and fired the computer up.  No problems.  The machine and OS (10.4.11) recognized the Sony.  I’ll try it out burning a video DVD in a few days.

Perhaps the most personally distressing drive glitch was it’s failure to play through Jaques Tati’s masterpiece film, Playtime – which snagged at one of the scenes inside the soulless commercial emporium, and again during the early scenes in the five star restaurant. On the merits of the restaurant scenes alone I recommended my friends at the Flatiron Cafe rent, buy, or somehow acquire and watch the movie.

The thing about cinematographs is they are expected to tell a story using moving pictures and, at this point in the development of the art, sound synced with those moving pictures. But if you mute the volume on whatever device you’re using to watch one of these moving picture stories, you will notice if you are observant that much of the action consists of shots of the actor’s mouths moving. And that is what passes for acting in too many instances – an actor repeating a writer’s output with inflection, cadence, sometimes pronunciation added. Thus a story told booklike using the written word, as opposed to an oral tradition using information acquired aurally.

Tati’s films, on the other hand, present stories told in moving pictures and sound with dialogue incidental to the action. Like a good silent film with sound, color, some dialogue. Subtitles are not really necessary to enjoy his work.

All of Tati’s atmosphere people are noteworthy for some physical characteristic that may include body language and gait. In the restaurant scene he makes one fashion plate glide, but that is a trick that must have been accomplished by pulling her through the scene on a hidden dolly.

I searched for a solution to the Toast “sense-code” problems, as well as for information about problems with this model optical drive. I checked in at Brock Kyle’s excellent resource, EveryMac.Com and posted a query to the forum there. I contacted by telephone a customer service rep at MacOfAllTrades.Com, and followed up by sending screenshots of a couple of the frequent sense codes in Toast 7 and 9, as well as the steps I’d taken to correct the problem.

What finally worked was running a several years old Maxell lens cleaning disc in the drive for about sixty seconds. The continuous high pitched tone produced thereby attracted the attention of little Seventy-Six, but apparently caused him no distress.

My email exchange with Cathi Davis at Mac of All Trades resulted in her stating she would send me out a replacement drive, even though I’d informed her the lens cleaner had apparently resolved the problem. That’s pretty good customer service.