I spent the week of February 7 at Nashville where my employer put me up in the Doubletree Hotel at the intersection Deaderick Street and Fourth Avenue – convenient to the worksite across the street.  After work I spent the afternoons roaming downtown Nashville and enjoying the Doubletree’s fitness center.  My Pentax Optio WP accompanied me on my travels.  On Friday 11 February I had lunch a genius cousin who works at Nashville Public Library, and she clued me in to websites run by the library and the state from which to access archives of digitized historical photos.  I found a handy, detailed map of the downtown area at Metro Nashville District Energy System that includes steam tunnels (maybe my next trip, eh?) here:

I won’t go on about my work activities, but will confine my remarks to my dining experiences while in the great metropolis best known for the world-famous Batman Building, and the things I saw while walking about.  Whenever I travel for work, I pack some instant oatmeal with raisins, cinnamon, wheat-germ, and brown sugar in bags, one for each morning, to make with hot water from the in-room coffee maker.  I usually cadge some extra coffee packets from the desk staff.  I pack peanut-butter and jelly sandwiches, apples, trail-mix for lunches.  Anything to keep to from spending up the per diem allowance for food and incidentals; I’d say I cleared at least $300 – 350.00.

Monday afternoon, February 7, I hoped to find in Nashville a restaurant as all around awesome as Westy’s at Memphis.  I did the same thing I did at Memphis, and that was to ask the staff for directions to the best place to get a hamburger downtown.

The valet parking guys suggested Paradise Park and gave me directions – 4th to Broadway, then right, across the street.  The burger, eaten, was only adequate, although the many french-fries served with it were excellent.  Paradise Park is the sort of place that would have appealed to me when 18 years of age and drunk at about one or two of the clock, ante meridian.  No ambiance to speak of and not particularly clean, an adjoining bar with a guitar playing woman singing live on stage, three or four homeless guys sitting around the bar’s front door and about a hundred feet into the room the bar itself with a disinterested looking young woman serving a drink to one or two people on stools.  I didn’t and probably won’t ever go back there, although, as I said, the food itself was okay. 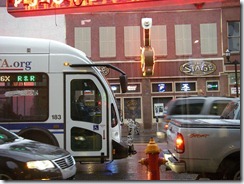 The secret to comfortably dining alone in a restaurant is to bring reading material along in case there’s no one interesting to engage in conversation.  I had in my windbreaker’s inner pocket a copy of something Charles Spurgeon wrote on worship, which is something I’ve been trying to definitively understand for several years.  Spurgeon, although he stupidly muddied his prose with the adjective “precious,” to my surprise had some insight into the topic.

The next evening, that of Tuesday 8 February, I had a taste for a salad or vegetables, and the valet parking guys suggested Demos’ (half-wittedly pronounced locally as Demo-ses), a vestigially Greek restaurant located on, I think it was, Commerce Street.  Some years ago I’d eaten an acceptable lunch with co-workers at the Murfreesboro Demo’s, so I expected and found better fare than I’d had the previous evening at Paradise Park.  I was shown to a table at a window across from a parking structure next to an industrial building that had been converted into, from the outside anyway, characterless lofts.  Almost as soon as I sat down facing the window, a husky black man in a goofy-looking fur or faux-fur bomber hat with ear-flaps and gold caps on his snaggle teeth loped across the road and reappeared a minute or two later in a road-weary maroon Nissan Sentra four-door in which he remained  parked across from where I sat and carried on at least a dozen, possibly as many as 20 transactions in about one hour.  Two other cars joined his briefly at different times passengers getting out and mingling with drivers.  Passersby, all black, stopped and made exchanges with the guy.  My waiter appeared uncomfortable with the activities outside and kept his back to the window in what I took for an attempt to “see no evil.”  I guess it’s dark when the guy leaves at the end of his shift to go home and he wants to get home.  I saw equally shady-looking whites of the sort I have heard referred to as RPMs (Rat-Possum Mix) apparently patrolling the area – probably up to a different variety of no-good.  Twice police in marked cars drove by and waited in traffic for the light at the corner to change to green without taking any apparent notice.  The food at Demos’ was good – I had an excellent “Greek” steak-and-feta salad, the steak perfectly cooked, that came with bread and chicken-rice soup.

Wednesday 9 February it snowed most of the afternoon, bringing after-work traffic in downtown Nashville to a standstill.  Do Nashville and standstill rhyme – maybe a little bit.  I hate rhyme.  I changed into a sweater after work and went out to enjoy the chaos happy I’d parked my car Sunday afternoon and hadn’t needed it since.  After walking up Deaderick and looking at St. Mary’s, the War Memorial, stuck traffic, Tennessee Performing Arts Center, Nashville Municipal Auditorium, and I don’t know how much more stuck traffic, I asked the doorman at the Hermitage Hotel, probably where my employer should have got me rooms, where I could get a decent salad.  All those PBJ sandwiches and little bags of trail-mix were fine, but I needed some vegetables.  The (yes, actually) uniformed hospitality worker suggested Puckett’s on Church Street, a nearby casual dining restaurant with American fare.  I proceeded thereunto.  I found Puckett’s food adequate, not as good as what I had at Demos’, and overpriced, more than I paid at Demos’ for a comparable meal.  On the other hand, I didn’t have to watch dope-deals from my window seat to sully the evening’s wintry beauty. 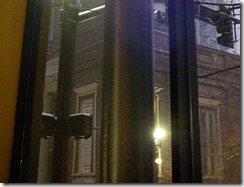 After supper, I wasn’t ready to go back to the hotel, so I walked back to the War Memorial, up its snow-covered and slippery steps, across the plaza, if that is the word I want, and into the atrium at which point I was greeted by a larger than life bronze statue that I’ve already mocked, probably wrongly, on Facebook.  I heard music that sounded both Southern and Gospel.  A homeless man and I looked in through the windows at a smallish auditorium through the inner doors of which we saw a band playing.  An older couple stood near what I thought was probably an entrance for ticket-holders, and a table inside could be seen upon and behind which could be seen T-shirts bearing the name of one Robert Plant.  I’d always thought that guy was a pot-smoker and an idiot associated with a “musical” group called Led Zeppelin whose music I much dislike.  No idea whether anybody else showed up, I walked on up to the capitol building then back to the hotel for a workout in the fitness center. 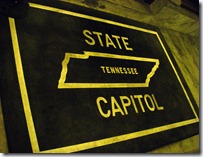 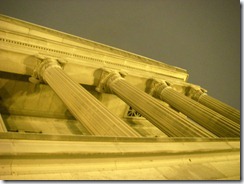 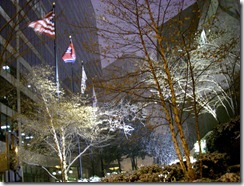 Back at the hotel I got a call from an old friend.  He and I were hired the same day, but he didn’t stay with my employer for much longer than a year.  We’ve kept in touch since he left to do work that could be done as written, by which I mean that policy and practice can, theoretically, meet or have occasional correspondence.  He and his family were driving back in to downtown from the suburbs to go sledding on Capitol Hill and he wondered whether I’d like to go with them.  Had I brought thermals and not just spent a few hours walking around in windy sub-freezing temperatures, I would have gone with them, but I was in for the evening. 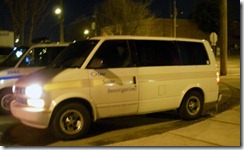 Thursday, I met my friend for supper; he works a couple of blocks from where I was staying and was in the lobby when I came down from my room.  He walks with a limp and has chronic pain due to an injury sustained during a training exercise in which he was directed by the instructor to use piece of equipment in a way contrary to the designer’s intent.  He liked Demos’, so we went back there.  I had the same thing I’d ordered Tuesday, and was not disappointed.  The hostess seated us in a different part of the restaurant, but I could still see the place the dope peddler had been parked earlier in the week.  The criminal element I’d observed Tuesday was not in evidence.  When I mentioned to my friend the seeming indifference to the curbside drug trade earlier in the week, he said that, based upon his observation, many of those who’d passed through the Metro Nashville police academy were not the brightest bulbs in the metaphorical fixture. 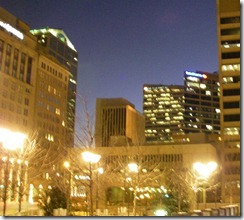 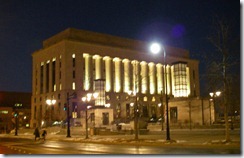 Friday was my last day in town and was the day I hoped to meet one of my brilliant cousins for lunch.  I arranged to have my luggage (only one PBJ now in the cooler) placed in the car, and received assurances there would be no problem keeping the 850 in the valet garage after checkout for two or three hours until I came back for it.  Still some ice and slush on the streets and sidewalks as I walked down Fourth to Church, turned right and walked until I’d reached the Nashville Public Library, where my cousin works.  I was snapping a picture of the building’s entrance when a Hispanic-looking homeless guy came out and quipped, “It looks better on the inside.”  I’d passed by the building on Wednesday night because it is near Puckett’s.  I recall looking at the library and wondering what it was. 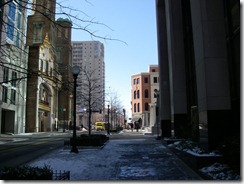 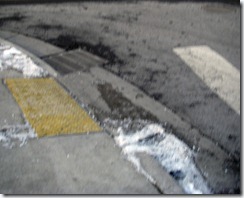 I probably never did get a picture of that entrance because I cannot find it now in my photo files.  I did find a picture I took that day of the curb at a crosswalk caused by cold-camera shutter delay when I was trying to get a picture of something else, so I’ll use that as stand-in.  My cousin was working with a patron when I arrived and I looked at some illustrated local history books in the Nashville Room on the second floor.  Outside the Nashville Room I spent a few minutes looking at an installation of historical photographs and other items pertaining to the electrification of Nashville – first street lights, electric street cars replacing mule-powered street cars, electric home appliance demonstrations, electric lights in homes, and so forth.  I like looking at the faces of people in historic crowd photographs.  Sometimes their eyes are as clear as the noonday sun, and bone structure of their faces, casts of features, apparent habitual expressions, posture and manner of dress speak to the observer of bygone status, care, interest, and general health.

We had a lunch at a small restaurant on the library’s premises.  The place swarmed with Class of 1960 coeds from Belmont or Vanderbilt expensively attired in de rigueur urban winter black.  I’d been wearing black all week, too.  My invisible man outfit of big, hooded waterproof windbreaker, weatherproof black ball-cap, and black cold-proof gloves that go with everything I like to wear and render me indistinguishable from a thousand other men of medium height, medium weight, and age anywhere between 30 and 50 on the street.  After lunch at the “boulangerie” where I order half a tuna and cheese panini (probably misspelled and a kind of grill-pressed sandwich) and a cup of carrot soup (which was absolutely horrible and more than spoonful of which I could not eat) my cousin showed me where she works digitizing and archiving historical photographs.  Amazingly cool stuff.  We said goodbye and I walked back to the Doubletree and got my car, which I’d not driven for a week, and drove down Fourth to I-40 and thence home.