What was it, last week or the week before, that I got a new set of tires for the Jamis?  A set of 60 TPI Clement X’plor USH “adventure tires.”  Because every ride’s a potential adventure, because the X’plor USH are 35 as opposed to the Tour Ride at 37 mm in width, because the X’plor USH is rated to 90 psi as opposed to the Tour Ride at 70 psi, I thought I could go farther faster on the Clements than the Continentals.

Both the Tour Ride tires and the X’Plor USH tires sport directional tread.  That means there’s a right (or manufacturer intended) way and a wrong way to mount them on the rim, directionally speaking.  The Tour Ride tires have little yellow arrows to indicate which way the tire’s supposed to roll, whereas the X’Plor USH tires do not.  Normally, that wouldn’t be a big deal because anyone looking at the X’Plor USH’s center tread would naturally mount the tire with the pointy end of the chevrons forward.  But Clement confused me with the second information bullet point on the tire’s packaging card: Inverted tread on the center section for traction on dirt roads. 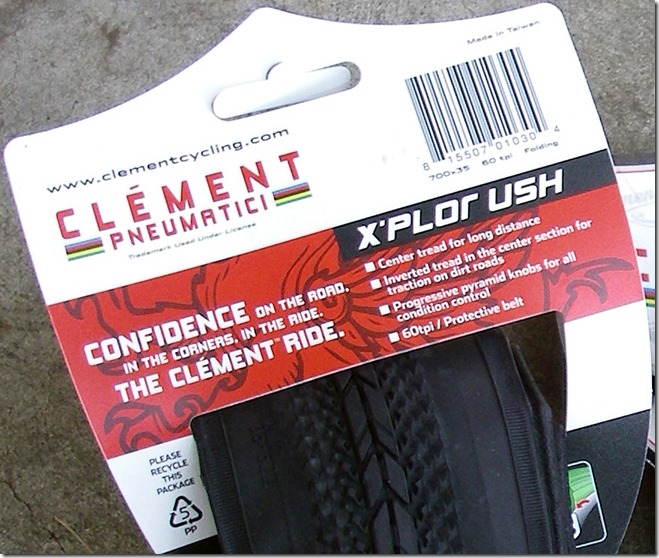 See – “Inverted” – even the tire is loaded onto its display-card with pointed end of the center section facing up and therefore backwards if one imagines the tire rolling forward, toward the reader.  So that’s how I mounted the tires on my Supernova’s rims.  The General tires on my Volvo have the same kind of counter-intuitive directional tread pattern, but the sidewalls indicate the tires’ proper mounting direction with small raised arrows pointing in the right direction. 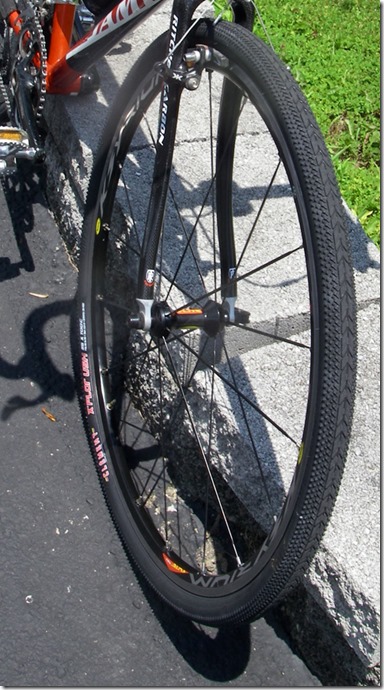 During a 27-mile hilly Pot County afternoon ride that included a 30 mph descent with a potentially scary curve to the right at the bottom, the tires thus mounted performed admirably.  Still, the ride “felt” a bit funny and acceleration was more difficult than I’d expected.  A doubt niggled that possibly I’d installed the tires incorrectly, but the thought of removing re-installing them proved sufficient to repress my doubt during the ride.  I also remembered, and this helped with doubt suppression, that the intentionally and serious about counter-cycling-“establishment” cyclists at Rivendell Bikes had opined that tread direction was not very important on bike tires.

Next day, though, I searched the Internet for X’Plor USH reviews in order to look at pictures of the tires installed on bikes by people expert enough in things bicyclish to warrant gear from companies in exchange for their reviews.  I wanted to see whether I’d goofed.  All the pictures I saw of the tires on the reviewers’ bikes showed the pointed end of the center section’s chevron tread facing forward.  For the record, I do tend to read those kinds of reviews for information about products I’m thinking about buying.

I uninstalled and remounted the tires accordingly, and on a couple of subsequent hilly, hot-weather rides, I noticed acceleration had improved markedly.  Handling on curves, rutted and gravel alleys, as well as cornering was no different with the change in tread orientation.

In terms of average speed, the X’Plor USH has increased mine by about half-a-mile per hour with the open end of the chevron facing forward, over against the Continental Tour Ride tires, and by about six-to-seven-tenths of a mile per hour with pointed end of chevron facing forward.  Not the full mile-per-hour I’d been expecting, but okay.  Probably Gatorskins would have effected the desired increase of speed,  but they’d be crap offroad.

What does Clement mean by “Inverted tread”?  My guess is that, by “inverted,” Clement means the chevron patterning sticks up, or protrudes, as opposed to being cut in to an otherwise flat rubber surface.  I’ll send a link to this post to Clement and invite them to comment.

P.S. I guess the reason I make fun of the Rivendell Bike people’s studied non-seriousness vis-à-vis bicycling as a “culture” is that, over time, I’ve come to resent the way one of their reps talked to me like I was an idiot when I called them for information about bottom brackets and cranksets when I was so new to cycling that I lacked basic vocabulary to phrase my questions in a way that identified me as one of the sport’s cognoscenti.  And I expect my intelligent, if badly phrased, questions to be taken seriously by anyone who is in business of selling items to meet the perceived needs of potential customers.  What this means for me is that I can’t take the Rivendell people seriously and occasionally make fun of them even when I find some of their online information helpful.  But I’ll probably never call them again.

Rivendell Bicycle Works sent me a steel lug.  The package arrived today – my wife and son found it on our front porch when we returned home from a neighborhood family bike ride.  It’s a little too pointy for a child just turned four to play with, so I haven’t shown it to him yet.  I took about a dozen pictures, but these are the only ones that turned out well enough to publish. 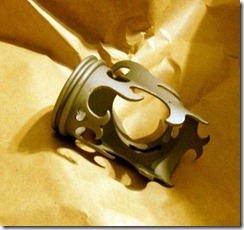 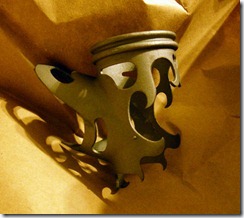 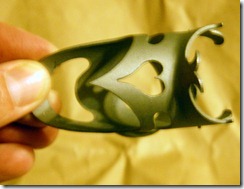 If they send me a complete bicycle, I’ll post some photos of that, too, and will spend a couple of years riding it in all conditions in order to properly review it. 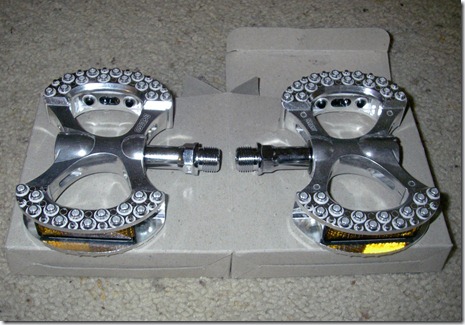 Arrived today, a set of MKS Lambda pedals – Rivendell Bicycle Works calls these Grip King Pedals, but I think they are the same product I purchased from Amazon.com.  I was expecting them Thursday, but they arrived in today’s mail.  They’re a bit smaller than I was expecting, but I think will help keep my feet on the pedals when my bicycle’s wheels strike some irregularity in the road’s surface when I’m wearing stiff-soled bike shoes, and will be more comfortable when pedaling in ordinary sneakers.  They are the pedal of last resort before I take the plunge with toe-clips.  The Razesa came with toe-clips, but they were too small to admit my feet, even when shod in aforesaid bike shoes.  The reviews on Amazon were pretty good. 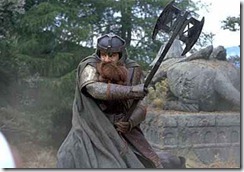 Those pedals remind me of Gimli’s axe.