Today, I paddled my new 2003 Anniversary Edition Folbot Aleut for the first time.  Most of you know this already, but the Aleut is Folbot’s 12′ single kayak.  Here’s a link to information on the Folbot line-up of folding kayaks that I think was current when the company went out of business last year (2016).  Weighing about 40#, it’s easy to put on the car’s roof racks.  I used a couple of cheap foam blocks to protect the hull.  The boat’s aluminum frame, probably aluminum in general, ‘feels’ more fragile to me than my previous folders’ wooden frames.  The Aleut’s gothic arch cockpit is huge – it seems even bigger from the inside.  I used a bungie cord to keep the seatback in place.  I remember reading on the old Folbot Forum that the style seat my kayak’s got consistently annoyed users by falling forward when they entered the cockpit.

The Aleut has zero rocker, is beamy, has a lot of primary stability but I was unsure of its secondary stability so I edged to turn with caution.  It was a little breezy today and I found the kayak didn’t turn into the wind much; no rudder today nor was one needed.  The kayak seems sturdy, stable, not bothered by boat-wake or small wind-waves.

Compared to Campsis Radicans, my old Pouch E68, the Folbot Aleut is pretty slow.  Surely no more than six miles did I paddle this afternoon, but I had no real plan except to put the boat in the water and paddle it around a bit.  It took me a mile or two to remember how and begin to paddle efficiently.   The kayak’s D-rings for perimeter line are placed where I carelessly and repeatedly whacked them with the paddle.  Altering habitual form to avoid that will take at least conscious effort and another excursion to effect.  My form today was sufficiently poor that one of my elbows hurts. 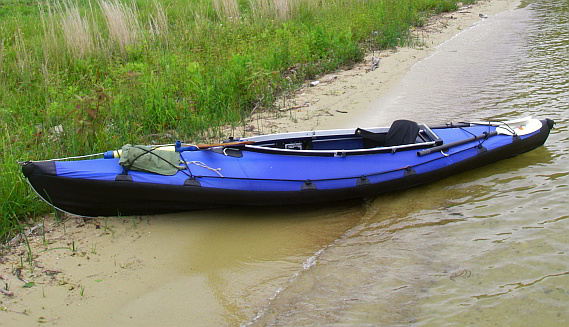 As you can see from the pictures, I overprepared – spare paddle, a couple of dry-bags with stuff I might need, a second lunch in case I got hungry, a bilge pump, a bilge sponge, about a gallon of drinking water in a Viet-Nam era military collapsible canteen.

I rode my ’07 Jamis Supernova this morning and again this evening after supper.  Being active outside feels good.