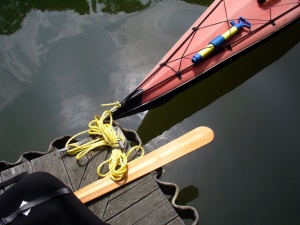 I had originally planned to put in at Devil’s Step boat ramp just outside of Winchester and paddle north and west to have the wind at my back for the voyage back to the ramp. When I realized it was Memorial Day Weekend, I changed my plans and paddled Woods Reservoir figuring there’d be fewer drunks on the water there than at Tims Ford Lake. Not that I have anything much against drunks, having been one, myself, in my late teens and early twenties. But they do tend to be nuisances, and hazards to navigation when operating water craft.

Woods Reservoir, as I expected, had about a score of bassboaters, maybe five family groups on pontoon boats, several nondescript small boats with outboard engines, one sailboat sailing, two jetskiis, and one couple in an inboard day-cruiser pulling five or six kids on four inflatable lake toys. Also saw the police boat out patrolling. Probably the same guys who stopped me around the end of last year just to assure themselves that they really had seen somebody sailing a kayak with an umbrella.

I put in near officer housing, trying not to disturb a family fishing on the bank about 15 yards away, and paddled out around Elder Island thinking I would go around it once before heading toward Morris Ferry and then toward the mouth of the Elk River. What I did instead was to paddle close to the island’s south shore, then cross over near the Franklin County boat ramp and paddle along the lake’s shore toward the dam, making a clockwise circuit.

Wasting time, I dawdled along the shore looking at turtles, fish, birds. I saw an otter splashing in the shallows and thought it was boat-wake making little waves crash. When the little waves sprang up the bank in the form of a shiny, long, four-footed creature with a tail and round ears that shook itself dry and sat by a log eating something and grooming itself, I recognized an otter. Dry, its fur was dark brown, and the creature appeared not to notice me as I drifted toward it along the shore. My second-hand factory re-furb Pentax WR’s shutter speed is creaking-slow, so I repeatedly snapped pictures hoping one would turn out well.

Seeing me, the little carnivore ran back up the hill, along the ridge, and, because I saw it swimming across in front of me as I paddled back out into the lake, apparently sought refuge in the water. Some other photos from yesterday can be found here.

The other thing I did yesterday was to practice sculling on either side of the boat – putting it on its side and using paddle strokes while leaning on the paddle to keep the kayak from capsizing. Then, in very shallow water, I tried to at least simulate those braces where the paddler lays on the water with the boat on its side using the paddle on the water as a sort of outrigger/float. I didn’t reach the point where I felt comfortable enough to commit to laying on the water with paddle in my outstretched arm.

I think I will head out again early Monday morning to paddle a couple of hours and practice sculling, bracing, maybe some wet-exits and self-rescue.