Did I mention the Folbot Aleut is slow compared to the kayaks I’ve been used to?  It is.  Back when I was paddling every available free day I had, was used to traveling fast and a lot farther.  This weekend, I’d planned to paddle the river that runs alongside McMinnville, Tennessee, putting in at Smooth Rapids and having them shuttle me back from the VFW lodge – only about 8 miles and maybe four hours, but downstream so the Aleut’s speed limitations wouldn’t bug me as much.

NOAA indicated only 30% of thunderstorms which meant, to me, 70% chance of no thunderstorms.  Weather radar imagery was clear.  I attached the Folbot to my car’s top, put my overpreparedness gear in a large bag and that bag in the car and set out.  You’ll notice what I’d failed to do before driving 30-odd miles – didn’t call the outfitter to make sure they were operating.

The fellow running the place asked, “Are you sure?”

“Why would I need to be sure about this?”

“The river’s at flood stage – we’ve had storms all week.”

“Yeah, the weather has been crap.”

“Whenever we have storms here, we get trees falling across the river.”  He went on to mention that two or three people had died during the past couple of months in the area – a kayaker on that stretch of river a couple of weeks ago when his boat capsized caught in a strainer and he panicked, and two swimmers drowned at Rock Island.  He said he had no way to tell whether the water was passable.  Said the water was about three feet above normal level.

“No,” he said, “and I’ve (paddled those eight miles) a hundred times.”

So, I left and went in search of some other water to paddle.  On the way back to I-24, I looked for an access point to Womack Lake, but finding none, I decided to put in at Prairie Plains Road Bridge, on the Elk River in maybe Coffee County, and drove out there.

This time, I’d remembered to take my Magellan Cyclo 505 to measure progress in addition to what my wife considers my usual over-prparedness.  It might have been about 11:00 a.m. when I arrived at the put-in.  No one else was there, and during my entire paddle upstream and most of my paddle downstream past where I’d launched, I saw no one else on the water.

The furthest point on this image shows where I found a place to eat lunch. The 505 unit shared a PFD pocket with my camera and it’s touchscreen apparently got bumped and it shut itself off.  I didn’t get much past this point after eating.  A ways into my paddle back downstream I again looked at the unit and recorded part of the downstream paddle.

I did see about 30 turtles sunning themselves on logs, one large snake, also sunning on a log, and three otters swimming fast downstream while I ate my lunch.  A few great blue herons, numerous other birds I couldn’t identify, and a flock of swallows swarming around the bridge as I came back downstream.

A few pictures with brief descriptions from start to finish:

Not far upstream from Prairie Plains Road Bridge.  It turned out not to be as jammed up with broken trees as it looks here.

So, as I was paddling by I saw what looked like an iguana sunning itself on a log.  When I got closer, I saw it was instead a snake curled up, sunning itself on a log.  I snapped the picture when I got a little further away using zoom.  During the rest of my time on and around the water I remained mindful of the possibility of snakes on over-hanging tree limbs and nearby logs.

This creature landed where you see it and rode with me for about a mile upstream.

My photographic skills and camera failed to capture the bright beauty of these occasional pink flowers I saw from time to time on either bank of the Elk.

Campsis radicans growing on a tree overhead.  Also the name of my old Pouch E68 kayak.

The camera got wet; I guess I paddled more vigorously than usual, yesterday.

Here’s where I backed in and ate my lunch – peanut butter and jelly sandwich and one of those wafer-cookie bicyclist snacks – before paddling out and turning left. I made maybe two-tenths of a mile more upstream before I turned back.  I’d wasted half the day driving to McMinnville and then trying to find access to that small lake.  And the current was stronger the farther upstream I paddled.

On the way back downstream, on my right, I explored a flooded creek that’s normally impassible. I got this far and photographed the flooded vista beyond. 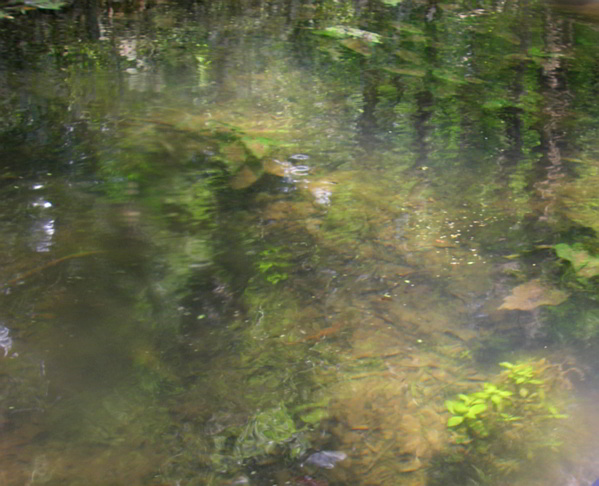 Here’re some of the plants growing under the water on that flooded creek.

And here’s the way back out to the Elk.

As someone has noted on a FoldingKayaks.org forum thread, the Folbot Aleut is stable enough you can sit back put your legs up outside the cockpit. Floating back downstream was lot less trouble than paddling upstream.  I ate another pbj sandwich and relaxed a bit.

There’s the bridge beyond which is the dirt ramp where I launched a couple of hours previously.  I paddled down farther, toward some of the islands at the top of Woods Reservoir, got repeatedly buzzed by a wasp, whack the snot out of the insect with my paddle, turned around and headed back to the car. 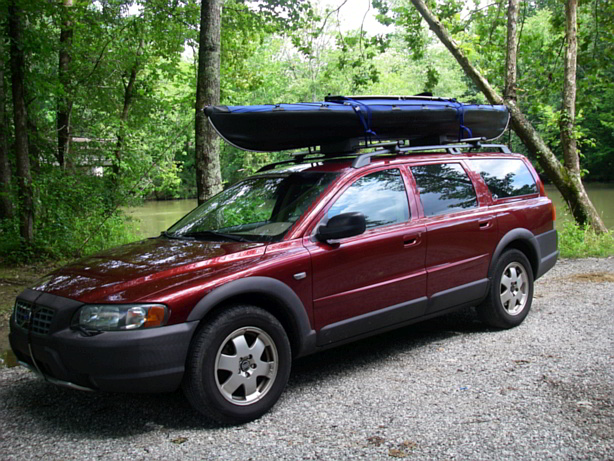 And there’s the car with the kayak on top.