Many thanks to Brother Troy McDonald for the year’s subscription he gave me to Free Grace Broadcaster, a quarterly publication of Mount Zion Bible Church.  I got my first issue last week, containing very old articles on the ever timely topic of Secret Sins.  I don’t have any conviction-proof spectacles, but am nonetheless reading this slim volume daily.

Complicated but true is this tale of how I came to buy a John Deere lawn tractor.

When we rented the white house, where we lived shortly after our marriage, I had the use of the landlord’s old John Deere lawn tractor. No idea what model it was.  Mr. Shelton kept it parked next to his detached garage the seat and dash covered with an upended plastic tub to keep off the rain, or sometimes by a portion of a tarp. That was the only riding mower I had ever used up to that time. Compared to it, the Murray, which I still own but will gladly sell to you for $25.00, is unimpressive. 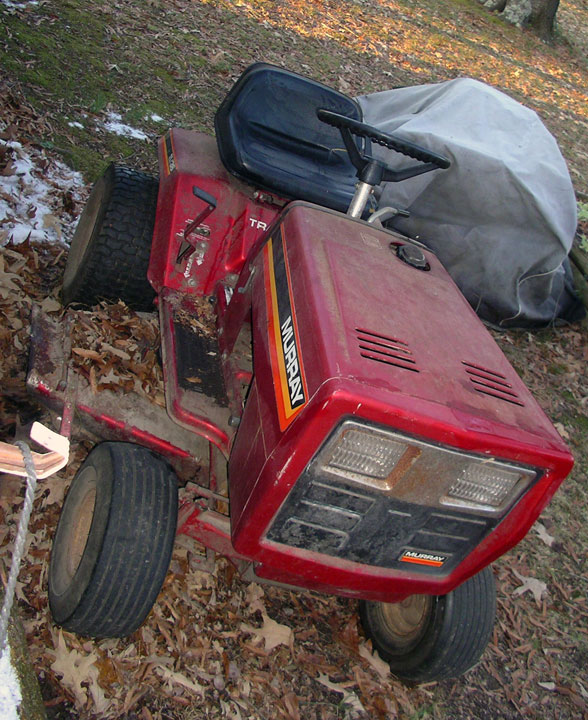 Back during the hottest part of last summer, my lawn mower began to lose power and stall out while cutting the last 10 or 12 long stretches in the back yard at the old house. I’d wait a minute, restart the Murray, and cut another pass or two. Then I’d repeat the business of waiting and restarting until the lawn was done. I discussed the problem with my tribal elders – older men with considerable mechanical expertise. I consulted another man who makes a living repairing mowers.

The problem, it seemed, could have had something to do with worn rings, if I recall correctly, or a spark plug. The commercial and residential mower dealer past whose shop I then drove daily to and from work, was kind of an ass when I requested diagnostic services vis-a-vis serious engine trouble. The expert I mentioned above suggested trying out a J-19 spark plug, which made difference in power, but had no effect on the machine’s tendency to stall. I replaced the fuel filter and some fuel line. No joy.

Tribal elder Mike suggested draining the carburetor and replacing the air filter. Air filter? Burnt shreds of foam, like sponge that’d been found abandoned in a vacant lot, then microwaved too long, adhered to the metal housing of what turned out to be a sort of metal box designed to contain a green spongy air filter soaked in motor oil (which I duly bought, soaked in SAE 30 weight, and installed). But I think it was draining the fuel and cruddy bits out of the carb that effected the repair.

The yard here at the new house, a 30 year old traditional Stepford brick ranch with Florida room, attached 2 car garage, and room for a pony, is possibly more than twice the size of that at the old house. The Murray bogged down a few times in the thick growth of springy country-clublike grass out front, and that patch in back that catches the sun right for mutant lawn growth. The machine’s steering has ever been loose – exceedingly imprecise. It’s deck has rusted through in a couple of places, and its engine oozes, and uses, oil that cakes its sides. No need for an oil change, because incrementally it is replaced already during the course of the season. I have no idea whether that Briggs and Stratton 10 or 11 horsepower engine has an oil filter?

I never did wash or otherwise clean up the Murray. When it was given to me, it had lived untouched for about three, four years in a lean-to shed in a favorite cousin’s back yard. Because she hires her yard kept, she gave the mower to me. Before I got the Murray, I used push mowers to cut the smaller lawn at our former residence. Let me tell you that the use of a riding mower is a fitness mistake, but results in considerably more warm-weather free time.

Upon our return to Stepford from our Thanksgiving trip to the farm, I decided to find a lawn tractor to replace the many years old Murray.

And it happened in this way. I had to find a reference work and drove to the Stepford library on a Saturday morning to get it. On the way, I drove past Mr. Roper’s lawn mower shop and thought it would be pleasant to look at new riding mowers and ask about the availability of used machines. He had no used machines, but did have a couple of brand new John Deere L series lawn tractors, some Home Depot price-point Cub Cadets, and bunch of orange painted commercial mowers. He has decided to quit selling the John Deere line of residential mowers, but I cannot now remember the reason he gave. He is a persuasive older gentleman who almost had me convinced to buy one of his new last-year’s model Deeres. But because Caution-Lady and I don’t make any large purchases without obtaining the other’s uncoerced agreement, I told him I’d give the matter some thought, and left. I stopped at Faulker’s, also on the way to the library, but they had no used machines, and all of their new mowers were way too expensive for my budget. Again with the orange-painted zero turn radius commercial mowers. Turns out the library didn’t have what I needed, so I went home and found a useable reference online.

Monday after Thanksgiving, I took the day off to relax from Sunday’s all day drive south.  At www.machinefinder.com, I found a 1984 John Deere 116 at a dealer across the county, near the Interstate.  So I drove over and had a look.  For a 25 year old lawn tractor, it looked remarkably well preserved.  It didn’t start, however, and had to be jump-started.  One of the spark plugs was badly corroded, and the battery would not hold a charge.  It needed a new muffler, and will need power take-off (PTO) bearings before the end of next season.

After Thanksgiving, in the town where I work, I drove past a John Deere tractor dealer, and on a whim stopped to see if they had any used mowers. They showed me a 2003 model GT235-E; it has an inverter and two outlets so you can use your mower as a generator to run power tools out in the yard if you need to. I will be interested to find out whether that’s useful or a gimmick. The machine looked almost new. The asking price was too high, however, so I said I’d think about it and left.

I joined a tractor forum to ask questions about these two John Deere tractors and got some good information and advice.  I looked at a Google Maps satellite view of the original owner’s hillside 2 or 3 acre lawn.  I phoned and talked with the original owner.  He’d always kept the mower serviced using actual John Deere products – oil, filters, etc.  He kept the mower in his garage alongside his vintage Harley-Davidson motorcycle and Corvette automobile.  Recalling Dave Ramsey‘s advice never to pay full retail price for anything, even if it is used, I drew out some money from the bank last week on a lunch break, then drove over to the John Deere dealer in the town where I work.

I took another look at the GT235E, checked the oil, started it, etc.  Walked back to the counter and put fewer $100.00 bills on the counter than I was willing to pay and told the dealer that, sales tax included, that was what I would give him in exchange for the mower.  He counted it up, thought for a moment, put it in the till and began writing me a receipt.  Before I left, I asked whether the original owner had supplied the operator’s manual when he traded the mower for new zero turn radius machine.  He had, so I got that, as well.  The dealer looked surprised when I asked him when he could deliver mower to my Stepford home, but did not balk.  The GT235E was waiting for me when I got home from work. 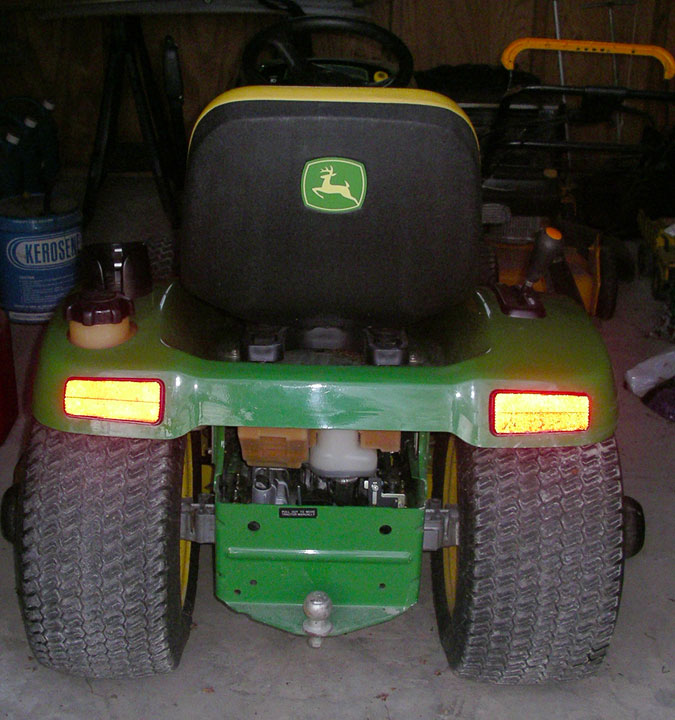 GT235E left side. Note that it is missing the flimsy plastic bumper that shipped with these tractors.

A shot of the cockpit. Cup holder? This mower's also got a cruise-control. The manual deck-lifter's about the only non-automated feature. 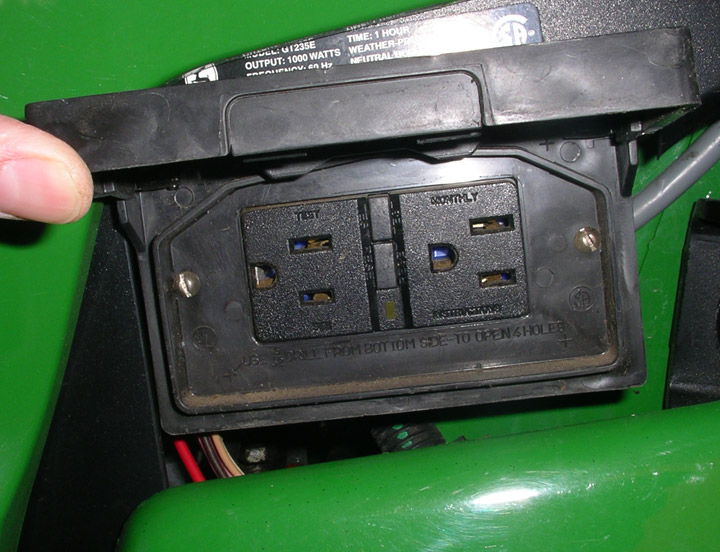 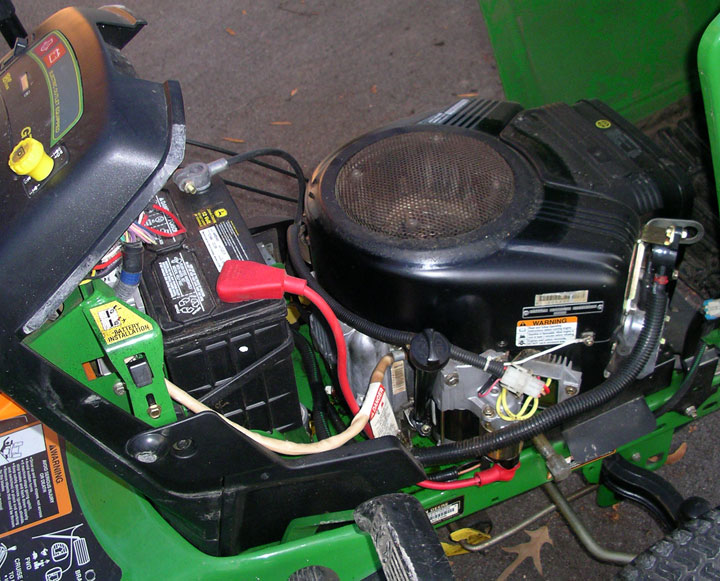 For the past year or so I’ve had Lyle H. Rossiter’s The Liberal Mind: The Psychological Causes of Political Madness.  The book is a challenging read that I have found empowering, revitalizing, and liberating.  Who knows, potentially life-changing stuff presented.  Although the author occasionally presents as settled fact opinion that he has not substantiated but which is also commonsense, he proffers a meticulously thought-out description of human development, potential psychopathology, potential health, and the consequences of each for human society.  I’d put the book down late last year to do some other reading, but have taken it up again.  Here quoted are some passages I read yesterday:

Human action is healthy when it is effective in the pursuit of happiness, legitimate in its respect for the rule of law, free because coercion is prohibited, cooperative when consent is voluntary and rewards are earned or given freely, and mutual in honoring the universality of rights to liberty and justly acquired property (156-7).

In political arenas, as in economic, social and personal ones, the tyrant’s motive is not derived primarily from his instinct for aggression per se nor from some real or imagined need for sexual satisfaction.  Nor are his pretenses to grandeur or divinity or his obsession with material wealth understandable as primary expressions of sexual, aggressive or acquisitive instincts.  Instead, these perversions of human relatedness are better understood as consequences of traumatic early attachment and their distortions in the development of the self (168).

The “spoiled” child who grows up dependent upon overly-indulgent parents is deprived of the virtures of self-reliance and self-control and the attitudes needed for cooperation with others.  Though he may present a facade of autonomy, he remains pathologically dependent on persons who accommodate him uncritically and thus fails to develop the capacity for self-regulation that is the essence of individuation….Unlike the self-indulgent adult-child, the individuated man actively rejcets, as a moral imperative, any opportunity to dominate, coerce, manipulate or defraud others.  he rejects any such opportunity because his standards of fairness strictly prohibit it, and because any such maneuvers would immediately signify a character weakness of which he would be deeply ashamed (178, 179).